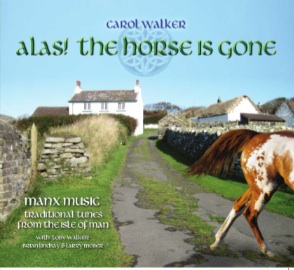 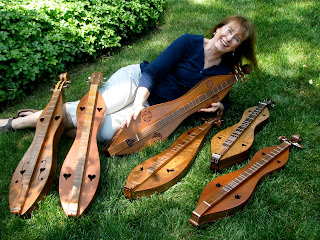 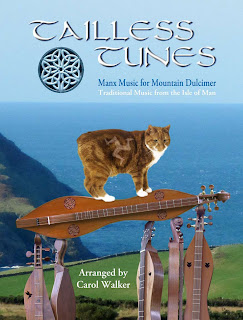 With the greater recognition of Manx music outside of the Isle of Man this is an ideal time for the release of a new Manx music book and CD in the US.
‘Tailless Tunes – Manx Music/Traditional Tunes from the Isle of Man’ (music book) and ‘Alas! The Horse is Gone’ (CD) are both the results of the efforts of retired American high school choral teacher Carol Walker to introduce Manx music to a wider audience. Acquiring hundreds of Manx tunes both items are exclusively devoted to music from the Isle of Man incorporating musical arrangements for the popular, but uniquely American folk instrument the Appalachian mountain dulcimer. Completely unlike the more familiar hammered dulcimer it is a diatonically fretted instrument with three or four strings and is strummed, or finger-picked, with the instrument resting on the player’s lap.

Carol, whose musical talent is prodigious, lives in New Jersey with her husband Toby and a growing collection of dulcimers, and took her inspiration from Charles Guard’s book ‘Manx Music for the Irish Harp’, finally visiting the Island in 2009. Charles shared some of his vast background and experience with Carol and also provided resource material. As a teacher and performer at dulcimer festivals in the north eastern states Carol has become a staunch supporter of the Island’s music commenting, “Everyone loves the tunes and can’t believe they’ve never heard them before! To the best of my knowledge I’m the first person on this side of the Atlantic to produce such a collection and a CD devoted entirely to Manx music”.

This is a valuable tool for the greater awareness of Manx traditional music and the book includes 27 arrangements, with 15 of those also featured on her new CD, accompanied by her husband Toby Walker on guitar and Brian Lindsay a fiddle and whistle player.

Carol and her husband will be returning to the Isle of Man later this year.

Both items will be launched at the ‘Nutmeg Dulcimer Festival’ in Connecticut at the beginning of October, but they can be ordered via Carol’s website, or requested by post, and includes a special combination offer.