I’m making a larger post than usual today. It’s one hundred years since the Isle of Man Steampacket’s vessel, “Ellan Vannin” foundered on the Mersey Bar. As you can see from the photo, Chief Minister, Tony Brown, marked the occasion.

Valerie Caine has kindly sent us two articles she has written on the subject. One is destined for the Peel City Guardian and features some of the Peel people caught up in the tragedy, the other is a more general history. 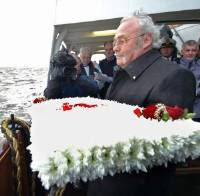 A MEMORIAL to the 35 passengers and crew who lost their lives when the SS Ellan Vannin sank a century ago has taken place on the Mersey. The service took place onboard the Mersey ferry “Snowdrop”.

Chief Minister Tony Brown and Steam Packet chairman Robert Quayle cast wreaths into the waters of the Mersey where the 21 crew members and 14 passengers perished.

Mr Brown told the gathering which included descendants of victims of the disaster, said the sinking of the Ellan Vannin on December 3, 1909 was ‘to this day remembered as a most tragic event in Island’s history’

From Valerie: On the 3rd December, 2009, it will be a century since the tragic loss of the Isle of Man Steam Packet Company’s vessel ‘Ellan Vannin’. Sailing from Ramsey loaded with cargo and a small number of passengers she headed towards Liverpool, but worsening weather conditions made the journey difficult.

The small vessel, which was originally an iron paddle steamer named ‘Mona’s Isle II’ was known to Manx sailors as ‘Li’l Daisy’ and reached the Bar Lightship in the teeth of a raging storm, but sank approximately fourteen miles from the Liverpool landing stage. Thirty five people lost their lives with many of the bodies never recovered. The wreck itself was later blown up by the Mersey Docks and Harbour Board to avoid any danger to other shipping.

It was considered by many, including the Isle of Man Steam Packet Company, and highlighted on the initial divers’ report that the ‘Ellan Vannin’ had been in collision with another vessel. This was also supported by the Mersey Docks and Harbour Board, but as the inquests progressed this theory began to lose credibility, and the Board of Trade Enquiry which followed arrived at the conclusion that the ‘Ellan Vannin’ had been sunk by heavy seas. However, rumours persisted that there were vested interests for pursuing this theory.

The ‘Ellan Vannin Disaster Fund’ set up to aid the dependants of those who had lost their lives organised many fund raising events, including concerts in Peel by the Douglas Male Choristers and the Peel Choral Society, and in total raised the huge sum of £12,997 6s 3d by the spring of 1910.

There are a number of connections with this story to the west of the Island including Captain James Teare who originally came from Peel, but was at the time of his death domiciled at Palatine Road in Douglas. Taking charge of the ‘Ellan Vannin’ in 1904 Captain Teare had previously sailed in foreign waters for many years, initially as an ordinary seaman before his promotion, but ‘The Ellan Vannin Story’ tells us that nothing is recorded against Captain Teare’s name on the Lloyd’s Register. This suggested that he only sailed as a captain in waters off the UK, and that his certificate of competency applied to home trade only.

During the summer of 1909 Captain Teare took command of ‘King Orry II’ an iron paddle steamer that was much bigger and faster than the ‘Ellan Vannin’. He is remembered as being one of the most cautious, capable and safest of the company’s captains and never away from his post. Seen to be one of nature’s gentlemen Captain Teare was also a lifelong teetotaller and said to be ‘married to the company’.

As the busy summer months receded Captain Teare began a month’s winter work, as did every captain involved in the company, on the 2nd December, 1909 on board the ‘Ellan Vannin’. His cautiousness signalled to others that he would be the last man to leave port if he considered the conditions too dangerous. But others did criticise Captain Teare later, questioning whether he should have carried on with his journey to Liverpool, suggesting that he should have returned to the Island, or sought shelter until the worst of the storm was over. Others in authority noting Captain Teare as a man of experience in these matters felt the criticism was unwarranted. The Isle of Man Steam Packet Company backed their man convinced he was on a navigable course at the time of the sinking and in a statement remarked that no living sailor could have made a better passage. However, Lieutenant Mace, the Marine Surveyor and Water Bailiff of the Mersey Docks and Harbour Board, and a highly respected figure in Liverpool also criticised Captain Teare at the Board of Trade Enquiry; suggesting that he should not have tried to cross the Bar Lightship under such conditions, but waited for daylight so as to steer the vessel into deeper water.

Captain Teare’s body was washed ashore at Birkdale, near Southport on the 16th January, 1910, and was brought back to the Island aboard the Steam Packet vessel ‘Douglas’ with Captain Cowley, his widow’s uncle, Master for that day. He left a widow aged 33 and four children aged between 10 and 2, but in the Liverpool Express and Echo of 22nd April, 1959 a correspondent incorrectly reported that Captain Teare’s wife and his twin babies drowned in their bunks on board the ‘Ellan Vannin’ that fateful night. None of his children were twins.

His widow was the daughter of William Cowley who had been Chief Officer of the ‘King Orry’ and niece of Captain Cowley of the ‘Queen Victoria’.

It was noted at the time that Captain Teare’s wages were £4 per week and that he had a house to the value of £200 and was in possession of an insurance policy also valued at £200.

First Mate John Craine was interred alongside Captain Teare in Douglas Borough Cemetery, his widow being the daughter of Mr. Teare the Douglas to Peel carrier. It was reported that approximately 5,000 people stood to watch the funeral procession which included seven captains, the General Manager, crew members, Chairman and two of the directors of the Isle of Man Steam Packet Company. Members of the Masonic Lodge who were also present dropped a sprig of acacia on Captain Teare’s grave.

Able Seaman, John Cook, was a Peel man by birth and lived in Patrick Street; aged 53 he left a widow and three children. Said never to be a deep sea sailor, Cook would follow the fishing trade during the off season.

His body was recovered from the shoreline at Blackpool on the 16th February, 1910, approximately 25 miles from the scene of the disaster and the furthest away

As a crew member of Peel lifeboat Cook took part in the historic rescue of 23 people from the ‘St. George’ which went ashore at Peel Castle, and was awarded a medal by the Norwegian Government.

John Cook also holds a little mystery. Each week he was said to go ashore when the ‘Ellan Vannin’ reached Ramsey to collect a letter at the agent’s office, which would always be waiting for him and was addressed to ‘Mr John Cook c/o SS Ellan Vannin’. One of these letters was waiting for him on the 3rd December, 1909, but it was never collected. Who left the letters has always remained a mystery.

A poignant postscript to this tragic episode concerns John Cook’s unopened pay packet which was still in his pocket and his name still visible. His niece was given a sixpence out of the man’s wages which was taken to a Douglas jeweller and engraved in the centre with the Three Legs of Man and the date of the sinking around the rim. She wore the pendant for fifty years before handing it into the care of the Manx Museum.

Two other crew members who also perished were Mrs. Eliza Collister (Stewardess) and Joseph Crellin (Fireman) who both lived at Glen Vine.

Mrs. Collister was formerly Miss Thomson who lived in Glen Vine before her marriage where she was well known and highly respected. She was responsible for the female passengers and it was said that her kindly manner made her very popular, particularly on rough crossings. Aged about 40 and the widow of Louis or Lewis Collister of East Foxdale she left behind an orphaned daughter aged nine. Other references refer to Mr. & Mrs. Callister and state that he died in 1907, suggesting that they had a son rather than a daughter. Mr and Mrs Collister had lived in the USA and South Africa, but his failing health had forced them to return to the Island. Both Mr. & Mrs. Collister are buried in St. Runius churchyard in the parish of Marown.

Joseph Crellin had been a Fireman on the ‘Ellan Vannin’ for many years. Living in a cottage at Glen Vine with his family for a number of years he was actively involved with the Wesleyan Methodist Church in Crosby where he was a teacher in the Sunday school. A staunch teetotaller he was married to the former Miss Collister of Ballamodda and was a member of the Good Samaritan Rechabite Tent. He left a widow and three sons all under the age of ten. 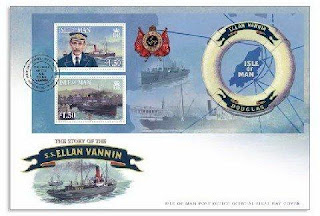