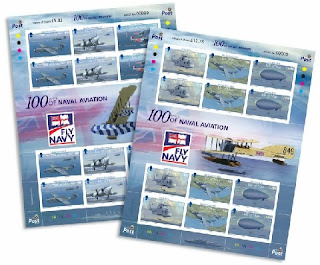 The 30p stamp depicts the Fairey Barracuda MkII torpedo dive-bombers of 827 Naval Air Squadron from the aircraft carrier HMS Colossus. Their roundels are those of the British Pacific Fleet. From June 1944, the operational training of air crew for these aircraft took place at Royal Naval Air Station Ronaldsway (HMS Urley), which after the war, became the main airport for the Isle of Man.

The 31p stamp features the first-long sortie carried out by a Blackburn Buccaneer that took place on June 3, 1966. At 13.20 a Royal Navy Buccaneer S2 from 801 Naval Air Squadron took off from HMS Victorious in the Irish Sea, on a non-stop, roundtrip sorties to Gibraltar. The aircraft’s pilot was Lieutenant John Cross, a Fleet Air Arm test pilot from the Empire Test pilot School and the Observer was 801’s Senior Observer Lieutenant Commander George Oxley.

The 72p value shows Fairey Flycatchers in the colours of 401 Flight from the Courageous Class aircraft carrier, HMS Furious, over the Irish Sea in 1932. These aircraft were the main carrier-borne fighters available to the Fleet Air Arm from 1924-1932 and they served with the Home, Mediterranean and China Fleets.

The 85p stamp shows a Royal Navy Merlin HM1 helicopter launching a Stingray torpedo. In the background, the ships are the Royal Navy’s latest Type 45 Daring Class Destroyers which will come into service in 2009.

The 98p value features two Sea Harriers (XZ455 and ZA176) of 899 Naval Air Squadron over San Carlos Water, Falkland Islands in May 1982. When the war started, eight extra aircraft from RNAS Yeovilton were prepared for combat to augment those that had sailed with the Task Force on 5th April (of which ZA176 was one).

The £1.36 stamp depicts a Submarine Scout Airship, SS24, which operated in the Isle of Man area during the First World War. It was initially based at Anglesey and later at Luce Bay. These airships were designed in less than five weeks and three weeks after this, they became operational. 158 of these airships were built and operated by the Royal Navy throughout the First World War. The two ships in the picture are the light cruiser, HMS Caroline and the seaplane carrier, HMS Ben-My-Chree.