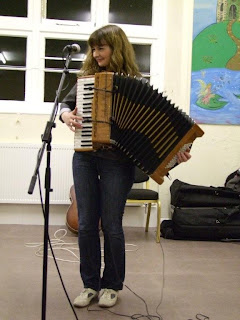 Trad Music Workshops Weekend
The busy Manx Heritage Foundation’s Manx Music Development Team held a very successful weekend of workshops at the Philip Christian Centre in Peel recently, ending with a well attended concert featuring both local and visiting musicians.   Tutors for the free workshops were renowned Scottish multi-instrumentalists Anna Massie and Mairearad Green who arrived on the Island with an impressive CV, both as a duo and performing with a number of well known artists such The Poozies, Blazin’ Fiddles, Karen Matheson, Box Club, Eddi Reader, Karine Polwart and Scotland’s Celtic Big Band The Unusual Suspects.
Although specifically aimed at adults with the opportunity to broaden their skills with the fiddle, bagpipes, mandolin, piano accordion and guitar, a Bree youth music session was also slotted into the schedule.
A concert held at the same venue to round off the busy weekend introduced new Manx band ‘Sannish’ who presented a fresh and lively sound with their own musical twist on local traditional tunes and songs. 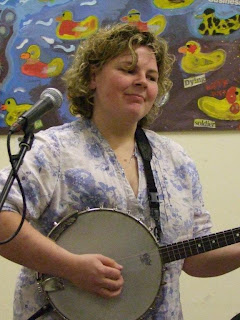 On their first visit to the Island the Scottish duo played an assortment of strathspeys, reels, jigs, hornpipes and Swedish polskas with a natural passion. Their music was enriched by an unashamed enjoyment of playing for a delighted audience who encouraged them to play on into the evening.
Both Mairearad and Anna also enjoy a wicked sense of humour and continuously provided light hearted banter in their lengthy programme which included the guitar, fiddle, banjo and the more mellow sound of the border pipes.
Due to their popularity it is hoped they will make a return visit to the Island in the not too distant future.
www.manxheritage.org
www.mairearadgreen.com
www.annamassie.com
Valerie Caine © March 2011 (inc photos)