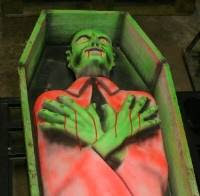 Nevertheless, MNH has been more than happy to show members of the public around the store, which is home to some 8,000 historical items for which there is no room to put on display in the main museums.

Hour-long tours, restricted to a maximum of 20 people, have been held on the last Thursday of each month since April. The store, which opened in 2004, is a treasure trove of stored social history, antique furniture, veteran agricultural equipment and archaeological artefacts.

Katie explained that a large proportion of MNH’s national collection was in store as is standard for most museums that have reserve collections from which to draw the public display. ‘The public see just the tip of the iceberg,’ she said.

Much more really interesting stuff here. Oh, and the photo is from the much loved and missed deathtrap at White City on Onchan Head. Remember that wooden roller-coaster? Dracula was one of the scary things on the Ghost Train.