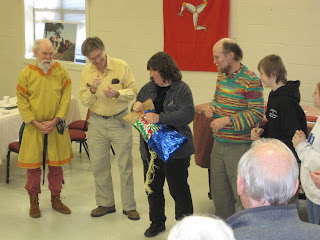 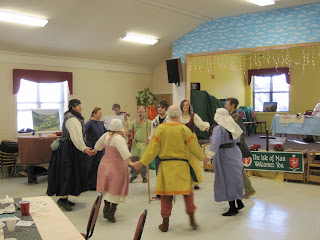 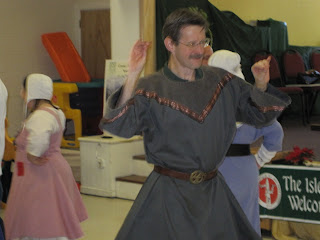 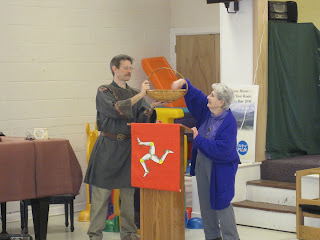 The Greater Washington Manx Society held its 12th Night celebration in Springfield, Va, this year and here are some of the pictures to prove it! As usual we played Pass the Parcel — and as you can see, it’s not just the adults who enjoy it! Here we see some Looneys ripping off the paper concealing the ultimate prize.

Our guests this year were “Three Left Feet” who danced two Manx dances, “Hunt the Wren” and the “Cutting of the Turf’ where their numbers were bolstered by our President,  Jim Kneale and his daughter, Megan, who donned the outfits and looked pretty good in them as you can see from Jim’s close-up.

We also had our raffle, tickets were picked out by our Governor Emeritus, Avril Quiggin-Shipman who was born on the Isle of Man. New members were welcomed, including another Manx-born American, Kearsley Walsh and her teenage sons Angus and Duncan. (God love them for coming to such a lame event but we kept telling them to “rejoice in their culture” and maybe one day they will!). Counting the Blower kids, that’s four legitimate Manx born members in our society. The Christian contingent left the Island in 1648 so we have an interesting range of heritage claims.

It was another successful 12th Night do. Blein Vie Noa everyone.

PS. If you get the fruit bonnag recipe off the NAMA recipes page you won’t regret it. Jim baked it and it is scrumptious.