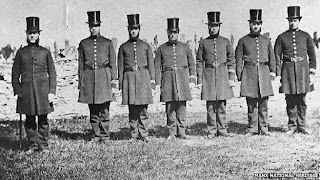 An exhibition is to go on display in the south of the Isle of Man to mark 150 years of the Manx constabulary.
The joint initiative has been arranged by the police and Manx National Heritage (MNH) and is being held at Castle Rushen court house.
The Manx force, which currently employs around 240 staff, was officially formed in September 1863.
MNH curator, Matthew Richardson said it was the beginning of a unified, all-island police service.
He added: “Prior to that there were only a few small police forces around the island, some of which consisted of just one constable.”
A spokesman from the Isle of Man constabulary said throughout the exhibition serving and retired officers will be on hand to answer questions from the public.
He added: “Thanks to the book Isle of Man Constabulary by George Turnbull, we are able to provide a wealth of information about the constabulary’s development, from law enforcement in the 18th century to present day policing, the first WPC and the formation of the Special Constabulary.”
BBC