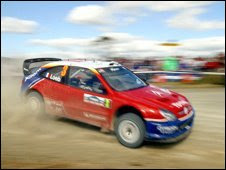 From the BBC: Rally Isle of Man was named ‘2008 Rally of the Year’ at the British Rally Championship Awards in Birmingham on Saturday. Championship Manager Mark Taylor was full of praise for the event. “The Isle of Man rally was a very popular choice. In fact they beat their nearest rival by a considerable margin”, said Taylor. It’s a true reflection of their team’s dedication to organising a delivering a first-class event.”

The Manx event is the first to win the accolade twice, having previously picked up the award in 2005.