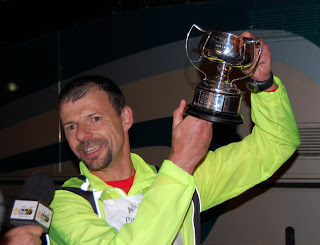 Jock Waddington led a record 187 finishers to win the 2009 Parish Walk, an 85-mile, 24-hour foot race around the Isle of Man. More than 1,600 walkers participated in the race, which began yesterday morning and ended early today.

Waddington, last year’s champion, completed the course in 15 hours, 45 minutes and 56 seconds. Here’s a video of him at the finish from www.parishwalk.com:

Janice Quirk, the women’s champion, came in second, at 15 hours, 58 minutes and 35 seconds — which makes her the fastest woman in the history of the Parish Walk. Here she is at the finish:

The fastest male record in the Parish Walk was set by Sean Hands in 2006, who finished in 14 hours, 47 minutes and 36 seconds! That means he set a pace of about 6 miles per hour.

I’d love to walk around the Isle of Man myself, but I’d have to settle for a more sedate pace — and I’d stop in a pub or two along the way. Congratulations to all the walkers!