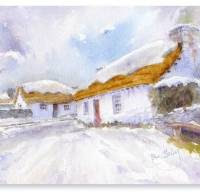 John Caley is a talented Manx artist and this watercolour was selected for the Manx National Heritage Christmas card, which has been produced to mark the 70th anniversary of the opening of Harry Kelly’s Cottage to the public and the creation of the first open-air folk museum in Britain.

Harry Kelly was a fisherman and native Manx speaker whose family had lived in Cregneash for several generations in the now famous cottage known as Harry Kelly’s Cottage. His family generously gave the cottage to the Manx Museum, which opened it to the public in 1938.

So to all of my loyal blog readers: Have a happy, safe and healthy Christmas.