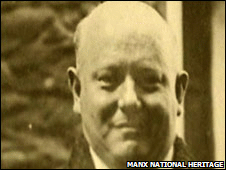 Apparently, the Establishment became worried that the King was falling under the spell of the Doctor and an allegation about the matter was made in a letter from a vicar to the Archbishop of Canterbury, Dr Cosmo Laing.

The Archbishop began an investigation into the claims and alerted the prime minister about his concerns. The Lambeth Palace documents detailing all this have been studied in detail by the programme’s reporter, Sean Stowell, and Roger Sims, an archivist at the Manx Museum who has led the research into Cannon.

I heard about this in an email earlier today:

Dear Kelly,
Brian Stowell’s son Sean is assembling a programme for Radio 4 which is about a “mystery man” named Dr. Alexander Cannon who lived in Mannin during the war. He was a “magician.” I attended one of his magic shows at the Douglas High School for Boys when I was a pupil there. We youngsters were very impressed with his hypnotism and levitation illustrations. What the masters in our school thought about his show was not revealed to us!
Lhiats, Terry Mc Caffrey (Vancouver Manx)