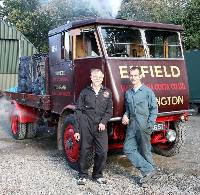 Phil and Chris Wedgwood restored this fabulous steam wagon. They are a father and son team, descendants of THAT Wedgwood.
Phil said: ‘It was a wreck when we got it. The cab drifted around in a very light breeze and when I climbed on the back to take some rubbish off the rubbish stayed where it was and my feet went through the floor. ‘We had to do quite a lot of work on it, including getting a new boiler made.’

Other work included a new engine and bodywork and painting it in its original owner’s colors. Chris said: ‘The wagon was made in 1934 and was originally owned by a brick company in Accrington, so it was made for carrying brick products and possibly terracotta piping. ‘In its latter days it worked on the docks in Liverpool shunting around the dock area taking the goods off the boats into the warehouses, until the 1950s when it was scrapped.’