Kelly McCarthy Posted on May 24, 2016 Posted in Uncategorized 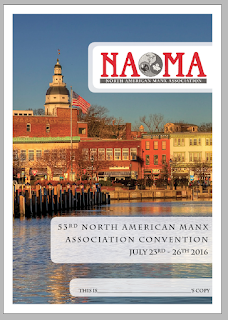 $15 for Manx Culture and History Workshops; Pricing for other events varies | 703-717-0074
The Manx — the people of the Isle of Man, between Britain and Ireland — are coming to Annapolis. The biennial convention of the North American Manx Association will bring people of Manx descent from all over the U.S. and Canada to O’Callaghan’s Hotel. The convention features an afternoon of public workshops on Manx culture, history (think Vikings), language (Manx Gaelic), crafts (kids & adults) and traditional music June 25, from 1-4 pm. Come learn about this unique people, place and culture!
All workshops free to NAMA Members, $15 per adult for non-members
SCHEDULE / SKEDJAL
1 p.m. Failt Erriu dys Ellan Vannin!  Kelly McCarthy of Port St. Mary, Isle of Man and Alexandria, Virginia introduces her beautiful native home and what makes it unique. Learn about famous Manx and Manx-Americans and the heritage the Manx brought with them to North America.
1: 30 p.m. Vikings – From Mannin to Maryland. The Isle of Man was once the center of a great Viking kingdom that stretched from Ireland  to the Orkneys in Scotland. Learn about Manx Vikings and a chance to be a Viking right here on the Chesapeake Bay — if you’re brave enough!
2 p.m. Manx Gaelic in 30 minutes! Bill Cassidy introduces the Manx language, Gaelg, a sister tongue of Irish and Scottish Gaelic. Learn a bit about the history of Manx Gaelic and pick up some important phrases. We’ll have a braew braew time and you’ll soon have Manx dy liooar, whooiney!
2:30 p.m. Gow Arrane: Learn Manx Songs.  Manx singers are making a big impression these at festivals all over the Celtic world and beyond. This is your chance to learn a few songs in Manx. We’ll lead you through a few simple song or two line by line and word by word until you’re ready to sing.
3-3:15 p.m. Coffee (or Tea) Break / Traa Caffee ny Tey
3:15 p.m. Room 1: Henry Collister: Maryland’s Colonial Manx Naturalist. Dr. Ellen Lawler introduces us to Henry Callister, a Manx immigrant who arrived in Oxford, Maryland in 1742. Callister was a profuse letter writer, a merchant, musician, and a pioneering Colonial-era naturalist.
3:15 p.m.-5 p.m. Room 2: Manx Crafts for All Ages — Come build and create with us as Chicago’s Margie Martinson-Brezina leads adults and children in a crafts workshop. We will build Manx-style thatched cottages for birds and decorate home decor with Manx themes. Supplies provided!
4 p.m.-5 p.m.  Room 1: Manx Traditional Tunes and Session — Join Ed Bradshaw and Bill Cassidy in this hands-on workshop on Manx traditional instrumental music. We’ll learn a few Manx tunes and perhaps get a chance to play for our supper (or at least a pint). Bring your instrument(s)!