30 Years on and NAMA is still presenting Awards in IOM 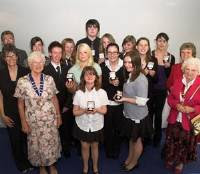 YOUNG people were honoured at the 30th annual North American Manx Association Awards. Association president Sally Dahlquist presented the awards which were commissioned to mark Tynwald’s millennium year in 1979. Education Minister Anne Craine MHK said the awards had evolved over the years while still recognising the achievements of young people in understanding and promoting the Manx culture.

Tom Callister-Wafer, 16, from Queen Elizabeth II High School, Peel, was presented with the music prize in recognition of his talent in playing the drums, violin and guitar. He is happy to help other students and was described as a great asset to the school music department. Tom has developed links with other countries through music and was said to be an ambassador for music performed by young people.

The arts and crafts prize was awarded to 16-year-old Castle Rushen High School (CRHS) student Georgina Kent. Georgina has a diverse style and approach with an expressive painting skill. She used her creative ability to design and make a dress from recycled materials and made her year 11 prom dress at home.

Ruby Biscoe-Taylor, 16, who recently took the GCSE equivalent in Manx won the Manx language award. The CRHS student is expected to achieve a high grade in the subject. She has a strong interest in Manx culture, particularly Manx music and will be studying in London from September where she will fly the Manx flag.

Sarah Jane Qualtrough, a student at King William’s College, Castletown, received the under-18s’ award for Manx culture. Proud to be Manx, she was honoured to represent the Island at the Thomas Cranmer awards in February where she was one of the youngest to win first prize. She is a helper and fundraiser at the Abbey Church, Ballasalla, is a member of the Manx Operatic Society and has performed at the Manx Music Festival.

The over-18s’ award for Manx culture was awarded to Harry Revill in recognition of his ability to MC entirely in Manx. The 18-year-old Ramsey Grammar School student and former winner of the award for overcoming a disability wasn’t present as he was in Senegal teaching English.

Health and social care students from Isle of Man College were awarded the Manx culture group award for under-25s in recognition of their work during a recent trip to Norway. The group used puppets to help overcome the language barrier while working with young children and also gave a presentation to fellow students and staff at a college in Norway.

Office administration students from Isle of Man College received the Manx community award having organised charity events including a stall selling non-alcohol cocktails and cakes, a sponsored walk and taking part in the One World Centre Charity Challenge.

Katie Saunders, 17, picked up the award for overcoming a disability. The full-time Isle of Man College student suffered cerebral convulsions as an infant and defied medics who told her parents she would never walk or talk. She has excelled at sport, clinching four gold and 10 silver medals in the Special Olympics and is preparing to take an exam in speaking with confidence.

Awards for the most progress in Manx was presented to Matthew Brammer, of RGS, and Jessica Isherwood, of Ballakermeen High School, Douglas. Year 10 student Matthew has been learning Manx since he was in year four. He has opted to take Manx as an exam subject and plans to do work experience at the Bunscoill Ghaelgagh to help improve his fluency.

Year nine student Jessica studies Manx as an additional subject in her own time. She enjoys singing songs in Manx.