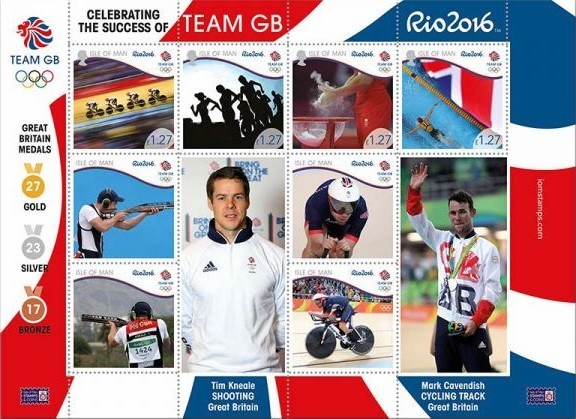 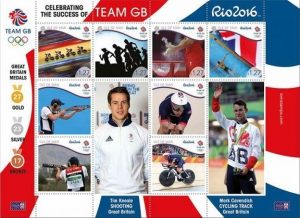 Isle of Man Post Office has released a very special celebratory sheetlet as a part of its Team GB Rio 2016 stamp collection which marks the team’s record breaking performance at the Games of the XXXI Olympiad that took place on 5th – 21st August 2016 in the city of Rio de Janeiro. The sheetlet was issued on 21st October 2016.

A record number of countries participated in many sporting events at this year’s Games. More than 100,000 people were directly involved in the organisation of the Games, including 70,000 volunteers, and 10,500 athletes from approximately 206 countries from around the world. Rio 2016 was an extraordinarily successful Olympic Games with an exceptional performance from Team GB who won more podium places than ever before at a Games on foreign soil and became the first nation to win more medals in the Games immediately after hosting, with 65 won at London 2012.

To celebrate this victory Isle of Man Post Office has issued a vibrant celebratory sheetlet featuring high definition images of Manx competitors, Tim Kneale, who came fourth in the men’s double trap, just one point behind the bronze and Olympian, Mark Cavendish, who achieved silver in the Men’s Omnium event. It also incorporates the colours of the Union Flag and likewise Team GB – red, white and blue along with the four Team GB stamps each featuring a different sporting event of the Games – cycling, athletics, gymnastics and swimming.

Commenting on the sheetlet Tim Kneale said: “I am a bit blown away at the fact I’m on this sheetlet in the Isle of Man, something I never thought I’d see. It’s great to get the recognition for the Isle of Man as well as at the same time wave the Manx flag at the biggest sporting event in the world.”

Maxine Cannon, Isle of Man Stamps & Coins General Manager said: “Team GB’s performance at Rio 2016 was remarkable and we are pleased to present this sheetlet which celebrates the success of the team who won an incredible 67 medals!”

“The Isle of Man Post Office along with the rest of the Island were proud of Mark Cavendish and Tim Kneale’s achievements at this year’s Olympics and of course the rest of the Team GB athletes.”

“We were delighted to have produced the stamps in recognition of our participation in this truly wonderful sporting event and of course being the only GB postal administration to do so.”

To view the special sheetlet and to order please visit www.iompost.com/rio