If you’re one of the growing number of Manx language speakers, then you’ll be interested in the recent publication of a new pocket dictionary under the expressive title Manx Words.

Produced jointly by Manx speakers James Harrison and Adrian Cain (Manx Language Development Officer for Culture Vannin), this recent addition to the rapidly growing material for learners and speakers was heavily influenced by the work and assistance of Steve Morris. Based at Swansea University, he produced a similar publication for learners of the Welsh language.

Adrian Cain, the Manx Language Development Officer for Culture Vannin commented, “This resource will be of real use to anyone who intends to learn the language. It isn’t meant to be a comprehensive introduction to Manx, rather it covers the key vocabulary that students are likely to encounter when they start to pick up the language.”

Manx Words is particularly useful to students in their first two years of study, with each word accompanied by examples used in every day speech, together with useful word lists and explanations of irregular verbs and common prepositions. 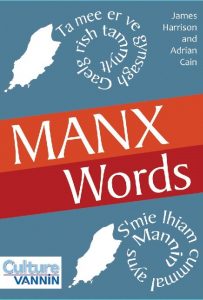 The dictionary is now available from many Island bookshops priced at £10.