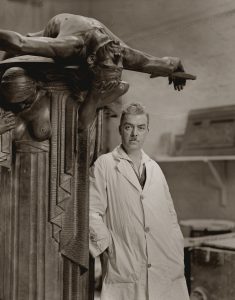 On Wednesday 19 September 2018, Manx National Heritage will host a public lecture at the Manx Museum by Deborah Beck, author of, Rayner Hoff – The Life of a Sculptor.

Born on the Isle of Man, Rayner Hoff was the son of a stone and wood carver. He began helping his father on architectural commissions at a very young age and attended the Nottingham School of Art where he studied drawing, design, and modelling, from 1910 to 1915.

He served in the British Army during World War 1 in France, an experience from which he was to draw most passionately in the creation of his various war memorials. Later in the war he made maps based on aerial photographs.

Following the War he enrolled in the Royal College of Art in London. He graduated in 1922 and received the prestigious Prix de Rome.

After studying in Italy for three months, at the age of 29, Hoff emigrated to Sydney, Australia. His arrival in Sydney resulted in a cultural renaissance in his adopted country. He became an influential artist and teacher, and established the first school of sculpture in Australia.  He later became Head of Art at the National Art School.

He became a member of the Society of Artists and sent work to their exhibitions. In 1924, he designed their medal, and in 1927, was responsible for sculpture for the National War Memorial in Adelaide.  His best known works are the monumental sculptures on the Anzac War Memorial in Sydney’s Hyde Park.

His work on the Anzac Memorial is cited as Sydney’s most moving example of publicly visible sculpture.

Hoff also produced a variety of outstanding figurative sculptures and in 1934 was commissioned to design the Victorian centenary medal. At the time of his death, on 19 November 1937, he was engaged on the George V Memorial for Canberra.

“Manx National Heritage is delighted to welcome Deborah Beck to the Isle of Man.  This promises to be a fascinating lecture, exploring Rayner Hoff’s eventful life in the UK, his decision to emigrate to Australia and his meteoric rise as a prominent star of the art world in Sydney”.

There will also be an opportunity to have your book signed by Deborah on the evening. A limited stock of books will be available from the Manx Museum shop.

The lecture coincides with the recent launch of a set of six stamps by Isle of Man Post Office celebrating Rayner Hoff’s work.

Tickets for the lecture cost £10 and are available for sale at the Manx Museum Shop, where presentation stamp packs and Deborah Beck’s book ‘Rayner Hoff – The Life of a Sculptor’ are also available.  Tickets also available online atwww.manxnationalheritage.im/shop.

The lecture takes place on Wednesday 19 September.  Doors open at 6.30pm for a 7pm start.