↓ Skip to Main Content
Home › Uncategorized ›
Kelly McCarthy Posted on August 22, 2011 Posted in Uncategorized
9th August 2011 Saving Time – Conserving the Castle Rushen Clock
Time has come to a stand-still in Castletown, as the famous one-handed clock of Castle Rushen has stopped. A prominent feature in the ancient capital of Castletown and a unique attraction to Castle Rushen itself, visitors to the Castle have been able to see and hear the rare and ancient movement. But for the remainder of the 2011 visitor season, the clock has been stopped. 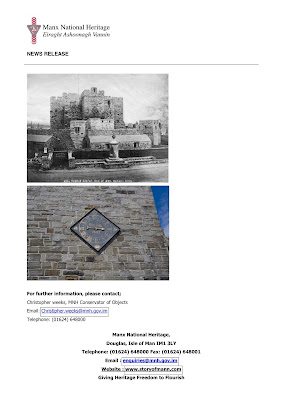 Recently, Manx National Heritage staff noticed signs of wear in the teeth of the cogs that drive the striking mechanism, and the clock stopped chiming properly. Chris Week’s, Manx National Heritage’s Objects Conservator made the decision to stop the clock. After telling the time in Castletown for over four centuries, the clock needs some major restoration and repair.
Chris Weeks comments; “In 2009 one of the heavy weights that drive the clock broke loose from its anchorage and fell, causing some damage. The accumulated grease, dirt and paint on the clock make the condition of the mechanism hard to assess, so for the clock to continue to run in future centuries, it has had to be stopped and then dismantled and cleaned. 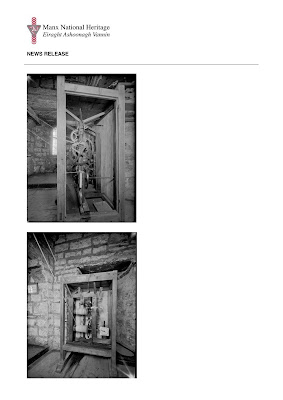 Manx National Heritage is fortunate to have the facilities and expertise to undertake the conservation work in-house at our workshops at the Manx Museum. Here the clock can be cleaned and properly documented for the first time. We hope to use scientific analyses to characterise the metal and wood used to make the clock, and we may be able to date the clock more accurately as a result.
We intend to retain and re-use all of the original parts, keeping our intervention to an absolute minimum. Modern fixings will be replaced with replicas where models exist. The clock will be reassembled in the workshops prior to its reinstallation at the castle. The whole process will begin as soon as the Castle closes for the winter, and should be complete by Christmas. We will seek to publish the results of our investigations in due course.”
Although the traditional association with Queen Elizabeth I (commemorated in the inscription on the clock face) may be fictional, the Castle Rushen clock almost certainly dates from the sixteenth century and has been in continual operation in its current location in the castle for over four hundred years. It is one of a few wooden framed clocks to survive from this period, though it has undergone significant changes and restoration during its lifetime.
Chief amongst these was the replacement, in the late seventeenth century, of its original escapement with the pendulum escapement we see today. Possibly at the same time the face was added (medieval clocks did not need faces because it was the chimes alone that alerted people to the time). Then, during the nineteenth and twentieth centuries many of the worn wheels and bearings were replaced.
The latest phase of the clock’s conservation will commence when Castle Rushen closes on 4th November for the end of season. You will be able to follow the conservation of the Castle clock on a blog launching when work begins. Look out on the MNH website for details, www.storyofmann.com.