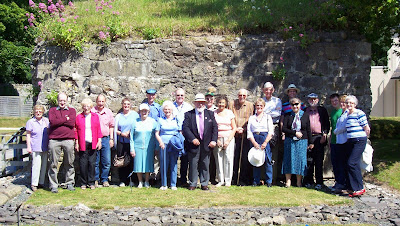 As part of the Centenary Celebrations of the World Manx Association held
during Manx National Week, a special but short visit was made to Rushen
Abbey where it all started in July 1911.

A group of local members of the W.M.A. together with Homecomers from U.S.A.,
South Africa, Australia, Liverpool, Manchester, London and Barrow in
Furness posed for a photograph in exactly the same spot as those group of
founder members a hundred years before.

The party then travelled to Malew Churchyard where a garland was laid on
Richard Cain’s grave by the President and Chairman of the W.M.A., Peter
Kelly and Wynn Kneale.