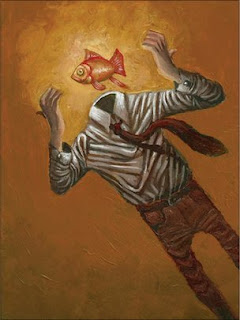 BBC: The final chapter of a Manx illustrator’s year-long art project will open to the public at the Manx Museum in Douglas on Saturday. Over the past 12 months Juan Moore has staged four exhibitions in his Welcome to the Neighbourhood series. Each show has been held in a separate and unrelated venue across the island, designed to make art more accessible. The fifth show will offer the chance to see all 100 artworks displayed together for the first time in one gallery.

Over the past year the Manx artist Juan Moore, has been staging exhibitions of his artwork in selected unusual venues as part of the “Welcome to the Neighbourhood‟ art project. The fifth exhibition in the project is being staged by Manx National Heritage in conjunction with the Isle of Man Arts Council and will open on Saturday 16th July at the Manx Museum, when all one hundred artworks will be displayed together for the first time in the final „Welcome to the Neighbourhood‟ art exhibition.
The 12 month „Welcome to the Neighbourhood‟ art project was funded by the Isle of Man Arts Council and involved art exhibitions being staged in a fish restaurant, a wine bar, the Villa Marina arcade and an empty shop unit.
As well as having a different and unusual location, each exhibition has also had a specific theme which was reflected in the exhibition‟s title and was used as a recurring theme throughout the exhibition‟s artwork. The first exhibition was held in a fish restaurant and was entitled “Carpe Diem‟ (Seize the Day… or Fish of the Day), whilst the second exhibition held in a wine bar for one night only was entitled “One Night Stand‟ and looked at the various stages of a relationship from male and female perspectives. The third exhibition entitled “Gighibition‟ was an exhibition of artwork inspired by the songs of various Manx musicians, who in turn performed at the opening of the exhibition.
“Gighibition‟ was an extremely unusual art exhibition and as Juan Moore, the artist, said:
“I had a few worries as to whether people would get the idea of a gig and an exhibition together, I was worried that art lovers would be put off by the idea of a gig, and I was worried that music lovers would be put off by an art show. Another worry was that there would be no connection between the music and the art. Once again I worried for nothing as we had over 500 people attend the opening night and everyone loved and got the concept, it was a highlight in the project for me.”
The fourth exhibition was held in an empty shop unit and was entitled „Life & Other Nonsense‟ and reflected a variety of things on the artist‟s mind and stories in the Manx press at the time.
Yvonne Cresswell, Curator of Social History, comments: “The final part of „Welcome to the Neighbourhood‟, exhibited at the Manx Museum will provide people who have been to all or some of the previous exhibitions an opportunity to see their favourite works again. All one hundred works will be together and, for those who have not viewed earlier exhibitions, it is the chance to see the artwork for the first time and appreciate how it has developed over the year-long project.”
In addition to the “Welcome to the Neighbourhood‟ exhibition at the Manx Museum, there will also be a programme of associated illustration workshops, an illustrated lecture and a live art event. The illustration workshops will be held throughout the week beginning Monday 25th July, sessions at 10.30am and 1pm, tickets £8.
The live art event will be held on Saturday 30th July and the illustrated lecture „Watching Paint Dry‟ will be held on Saturday 13th August, tickets £3. All the events will be held at the Manx Museum and further details and bookings can be made by contacting (01624) 648000, tickets are available from the Manx Museum Heritage Shop.
The “Welcome to the Neighbourhood‟ art exhibition by Juan Moore opens on Saturday 16th July at the Manx Museum (open Monday to Saturday, 10am-5pm) and continues to Saturday 13th August 2011.