A letter from Myrra Johnson 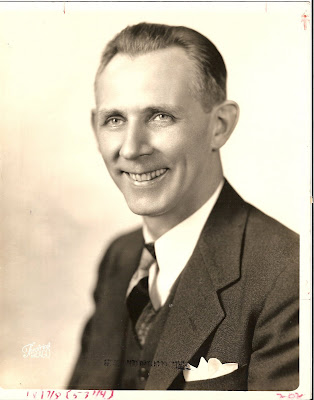 My Dad was known as “The Manx Basso” (bass-baritone soloist) in those days and did much professional work around the Chicago area in the 1920’s-1960’s. He won a radio contest sponsored by WGN in the early 1930’s as the best male vocalist in Chicago. This really started his career in early radio as well as other areas of music around Chicago. He was the first bass soloist to sing on a coast to coast (later known as network) radio show. He also sang in a group that performed at President Hoover’s inauguration. I have a lot of his newspaper clippings and reviews which are rather fascinating to read. He used to give a lecture on the Isle of Man with glass slides and a lecturn. He was later sponsored by Mrs. Walgreen of the Walgreen Drug Stores. Perhaps you saw the showing of the old Manx slides at the last NAMA convention. For many years he was President of the Chicago Manx. I still have a program of a dinner and meeting that was held at a YMCA on the west side of Chicago. My Dad was in charge of the first Manx Homecoming in 1927 (I believe). At that time he met my mother and they were later married. He had to go back to wed her the next year! Well that’s all for now. His life is fascinating reading. If you’d like any more info at a later date I’d be glad to supply it.
Just a sidenote regarding the Chicago Manx……when they held their meetings, Bob Kelly, Florence Prendergast and I (who were just kids then) used to have a wonderful time playing in another room or romping ariound while the grown-ups had their meeting. Of course this was back in the late 1930’s-40’s!! I have such happy memories of those great days! 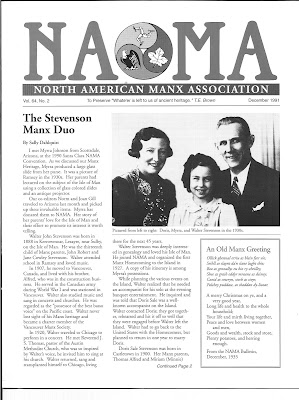