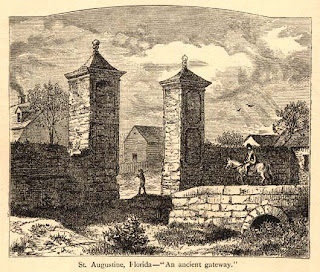 Laa mie! I promised Kelly a series of posts on the Manx language, but first I’d like to share the mysterious story of an early Manx settler in Spanish Florida.

Back in 1696, the English barkentine Reformation was shipwrecked off Jupiter Island on the southeast coast of Florida while on its way from Jamaica to Philadelphia. The survivors walked 230 miles north along the coast to St. Augustine, the capital of Spanish Florida since 1565.

One of those survivors, Jonathan Dickinson, kept a journal detailing harrowing encounters with Indians hostile to “Nickaleers,” as they called the English. The Spanish eventually rescued them, but not before five of the party died of exposure and exhaustion.

In St. Augustine Dickinson and his compatriots were aided by “some English” that lived there. “The chiefest in esteem was one William Carr of the Isle of Man,” Dickinson wrote.

Carr apparently had been shipwrecked himself about 30 years earlier — in the 1660s — on his way to South Carolina. “This man turned Roman Catholic and married a Spanish woman, of whom he had seven children, and is an officer in the garrison,” Dickinson wrote. “He was chief interpreter.”

With the help of Carr and the Spanish, Dickinson and his party made their way to South Carolina, and from there to Philadelphia. Dickinson’s journal was first published in 1699 and “Jonathan Dickinson’s Journal” is still available.

I’ve often wondered what became of William Carr, and about his origins on the Isle of Man. Perhaps some of our NAMA members in Florida are acquainted with the history of this son of Mannin, who wound up very far from home and in a different climate indeed!