↓ Skip to Main Content
Home › Uncategorized › A Sense of Belonging

A Sense of Belonging 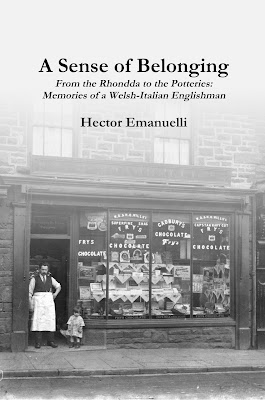 Hector Emanuelli recently made a nostalgic return visit to the  at the age of 90 on completion of his autobiography ‘A Sense of Belonging’, but on this occasion he was a free man.
He compares his life to that of a knickerbocker glory, not inappropriate for a man who spent many years manufacturing and selling ice cream, but his first visit to the  included an enforced stay at the Peveril Internment Camp during World War II brought vividly to life in this new book.
Born in the Rhondda, South Wales, of Italian immigrants Hector also lived in  and holidayed in , but as the title suggests he always felt like an outsider.
Detained without trial and shunted from one camp to another the story behind Hector’s arrest is an incredible tale itself. Holidaying in  to improve his grasp of the language and discover more about his cultural heritage he unwittingly landed in a pseudo-military training camp run according to fascist principles. Eventually returning to the  he was seen as a threat to national security and subsequently arrested.
Herded in with others bearing the fascist label he recalls the journey on the ‘Lady of Mann’ and the hostility of the waiting crowd in . Hector’s consequent stay in Peel was tempered by visits from his mother and the delivery of welcome parcels.
Originally christened Ettorino his book contains a number of evocative family photos and reproductions of his own artwork, including a selection from his time spent at the Peveril Camp in Peel.
Using his time to good advantage Hector admits that the Peveril Camp was quite civilised and brought him many educational opportunities, but also writes of the escape attempts. Look out too for the description of an unusual football match between the Metropolitan Police and the Italian internees.
Hector was later removed to Brixton Prison before his eventual release.
The novelist Margaret Drabble commented on the book, “What a remarkable story, and very well told – the interweaving of Italian memories and life in  and  is so vivid and moving. The  episode is particularly interesting…”
A copy of the book is available for reference only at the Ward Library in Peel, or alternatively copies can be purchased online through Amazon.
(Courtesy of Manx Tails)
Valerie Caine, © March 2011