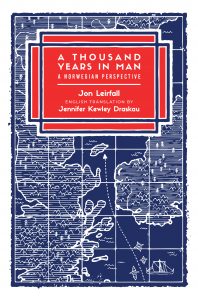 This absorbing publication, issued to mark the fortieth anniversary of the Tynwald Millennium celebrations, offers a unique insight into the history of the Isle of Man from a Norwegian perspective, and a fresh perception from an outsider’s point of view.

Written by Jon Leirfall (1899 – 1998), it was launched at a small get-together by Culture Vannin in St John’s with the blessing of his family.

He was a Norwegian politician for the Centre Party, elected to the Norwegian Parliament on six occasions, and well known for his writing, which included several saga-pastiches which satirised Norwegian politics. As well as a prolific writer of local history and humorous commentary in the style of the ancient sagas, Leirfall was also a member of the Norwegian resistance during World War II.

For this book he drew upon a wide range of sources, including the Norse Sagas, but Leirfall’s comments regarding his visit to the Isle of Man during Millennium Year also offer a thoughtful presentation of a more recent history. But the publication also focuses upon the Island’s parliamentary system and a developing Manx identity.

A copy of the book, in Norwegian, was gifted to Professor Angela Little by her friend Professor Jon Lauglo, who had been made aware of its existence through his own friendship with the author. Consequently it was translated by Dr Jennifer Kewley Draskau – herself a well-known author, translator and academic.

The book is now available in bookshops and museum shops across the Island priced at £12.