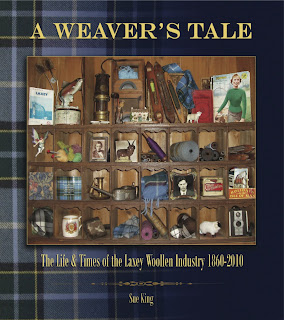 I originally covered this book here. But as so many more people will now have seen it thanks to the Mostly Manx appearance at the NAMA Convention I thought Valerie’s review today would be appropriate. It’s fantastic by the way!

With the recent publication of ‘A Weaver’s Tale’ by Manx author Sue King readers will be given a new insight into the little known story of ‘St. George’s Woollen Mill’, and its prominence within the lives of the people of Laxey. But the book also provides an absorbing historical account of the village itself, as it adjusts over time to change and regeneration.

The book is enhanced by a large selection of evocative photographs showing both the growth of ‘St. George’s Woollen Mill’ and the changing landscape of the surrounding area.

‘A Weaver’s Tale’ becomes a fascinating journey into the rarely told tale of wool, chronicling its impact on the local population in both work and their dressing habits. Charting its rise from home weaving to industrial mechanisation, the book challenges our perception of the term cottage industry.

In this book you can read more about the mill’s first owner, the gloriously named Egbert Rydings (who married into a Manx family), and the influence of the philanthropist John Ruskin. But it’s also a moving tribute to the local people employed at the mill.

Packed with an intriguing index of wool related facts and folklore, the reader can also follow the history of a number of Manx tartans produced at ‘St. George’s Mill’ from the 1960s, which found renewed success with the much celebrated tartan revival in the 1980s.

Now in the safe hands of a second generation of the Wood family ‘St. George’s Woollen Mill’ has entered a new era with the opening of the ‘Hodgson Loom Gallery’, and the prospect of a new catering facility in the near future.

Priced at £14.99 ‘A Weaver’s Tale’ is available from the shop at ‘St. George’s Woollen Mill, Glen Road, Laxey, ‘Mostly Manx’, Nelson Street, Douglas, or from bookshops throughout the Island.