Across the Great Divide – Manxmen in the American Civil War 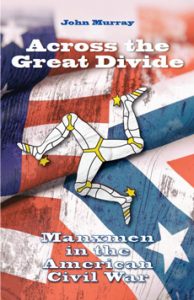 The American Civil War (1861-1865) is a conflict which still resonates strongly today. As might be anticipated, immigrant participation was significant, particularly in the Union forces, and is generally well documented. However, this book is the first to explore the role played by men from the Isle of Man,a small island in the middle of the Irish Sea.

From a broad overview of the contribution of Manx soldiers, the author draws on previously unresearched military service records, extant war-time correspondence and other documentary evidence to focus on the war-time experiences of more than 50 Manxmen who played their part in the ‘new birth of freedom’ of the United States.

John Murray is a retired solicitor now living on the Isle of Man. A long-time student of the American Civil War, he has published numerous articles on diverse aspects of the conflict.This is his first book on the ‘War between the States’.