Ahhh and Boo and the Manx 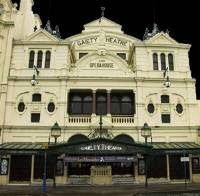 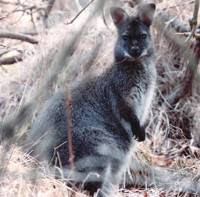 A couple of stories today as I won’t be posting tomorrow as I’m off to the Gulf on a job in Abu Dhabi.

There’s a cool story here about the wild wallabies of Ballaugh. Apparently some escaped from the Wild Life Park and now there are about 100 in the wild.

And over at the Gaiety at ghost tour seemed to have the desired effect and a mysterious man was spotted by the visitors.

When his great uncle, Leslie Quirk, died five years ago, Manx-born writer John Quirk was ashamed that a promise he’d made as a young man had not been kept. Leslie was one of the foremost exponents of the Manx language and John had promised he’d learn the language. For one reason or another, it never happened. Until now. In a new monthly column, Manx Tails will follow the adventures of John, wife Emma and son Ryan as the Quirk family attempts to go native:

I’m not psychic, but I know what most of you are thinking.
What on earth does that headline mean? Up until five minutes before I started writing these words, I didn’t have a clue either. You see, me and languages have never been comfortable bedfellows.
At school, I studied French and German until 14 and then chose German at O-level (yes, I am that old). I failed miserably, although there were extenuating circumstances, yet even if I had been focused and on the ball, I’d have been happy to scrape a pass. I wasn’t too bad at the writing; it was the oral – my French and German accents wouldn’t have been out of place in ‘Allo, ‘Allo.
By the time I was out of education and working, I knew I’d made a huge mistake in not trying harder at languages. I wanted to speak them – I just didn’t have the self-discipline to work hard enough.
One afternoon in the early 1990s, I was at Uncle Leslie’s home in St Jude’s sampling one of his cups of tea – I can’t use the word ‘enjoyed’, as Leslie used to stew his brews over an open fire; cremated, as opposed to brewed – when he asked if I’d ever thought of learning to speak Manx.
I admitted that I’d not given it much thought. ‘You should,’ he said, with that ever-present twinkle in his eye. ‘The language needs young Manx men to speak it. If it is to survive.’
A few months after Leslie died, I attended a tree-planting ceremony in his honour in the gardens behind the Forestry Board Office in St John’s. It was an emotional day, with children from Bunscoill Ghaelgagh, the Manx Language Primary School, singing songs and reading out their memories of Leslie.
Of course, they did all this in Manx. And as most of those present were also Manx speakers, I felt like I didn’t belong there, which wasn’t helped by the fact that I knew I’d let Leslie down during the 10 years that had passed since that afternoon in his cottage.
I had every intention of keeping the promise, but as so often happens, life got in the way, which is about as feeble an excuse as anyone can give for putting off something for so long.
Last autumn, our young lad came home from Arbory School, singing a Hop-tu-naa song. In Manx. He even knew what it was all about, whereas I couldn’t understand a single word. That was the final straw. Ryan is five-years-old. If he could do it, so could I. So, here we are, fifteen years or so after I made the promise. Better late than never, I imagine Leslie would say.
I’m under no illusion that this is going to be easy. I’m sure Ryan will embarrass me with how quickly he picks up the language. Emma too, no doubt. When I told a colleague at work about this little experiment, her cutting response was: ‘Quirky, it’s going to be difficult for you. Speaking Manx doesn’t just mean adding “yessir” to the end of every sentence…’ Ouch.
There are three aims with this column – first, to help promote the Manx language; second, to investigate its ongoing revival; and third, to have some fun along the way.
I’ve roped in Adrian Cain, the Manx Language Officer, who has promised to be a hard task master and he’ll be keeping a close eye on our progress. Adrian has just started running a weekly Manx for beginners course on a Friday lunchtime 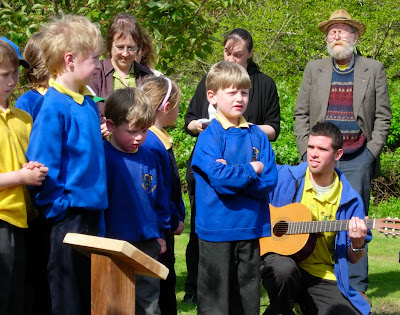 at the Manx Museum, which I’ll be attending.
Feel free to email me any questions, or indeed suggestions for the coming months. We have several plans in the pipeline, including a visit to Bunscoill Ghaelgagh (see photo), but new ideas are welcome.
*Now, if you’re still reading this and wondering about that headline, it says: He doesn’t know a word of Manx. Let’s put that right, yessir.
*******************
John can be contacted at johnquirkbooks@gmail.com
Links:
www.sch.im/bunscoill
www.learnmanx.com
www.johnquirkbooks.com
www.manninmedia.co.im (for Manx Tails)