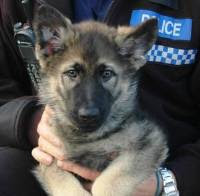 …well he will be until he’s been trained to take down a villain. Bodie is 10 weeks old and one of 10 dogs in the Manx constabulary force. As Sergeant Kelly said: ‘Fully-grown German shepherds are physically imposing and their mere presence can help to restore order when incidents are threatening to boil over.’
I remember back in the 1970s seeing a headline in the Examiner that read, “Police dog strength doubled” and on reading the article discovered that they had bought another one.