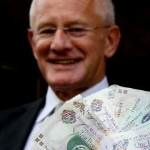 He replaces Tony Brown, who has retired from the Manx government.
Mr Bell, 64, was first elected to the House of Keys in 1984 and worked as a minister in a variety of sectors, including tourism, industry and home affairs.
He spent nine years, from 2001 to 2010, as treasury minister, before taking on the newly-created role of economic development minister last year.
Mr Bell commented: ‘It is a great honour to be appointed chief minister at this time of challenge and opportunity for the Isle of Man.

Congratulations from everyone at NAMA.