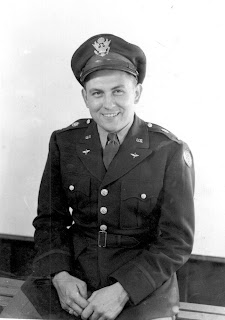 Another great piece of detective work from Ivor Ramsden and the WWII Aviation and Military Museum:
Following the publication of the article on the flag presentation, yesterday I was looking through our photos relating to the B-17 crash on North Barrule. One of the photos was a portrait of 1st Lieutenant Lawrence E McGhehey, one of the victims. I haven’t had this photo long and had a good look at it yesterday for the first time. He is wearing a signet ring on the third finger of his right hand; a signet ring which, despite the grainy photo, looked reminiscent of a badly damaged one which was found at the crash site. This ring bears a date, 1937, and the initials E M. We’ve had it for a long time but seeing as the initials don’t tie in with any of the victims, I’ve not pursued my enquiries over it. However, last night I decided that I should investigate further. I couldn’t remember where I’d got the photo. I thought it was from a website. I emailed it to Kevin Wilson (Keeper of the Squadron’s records) and blow me, it came from him originally. It’s from his father’s photo album. Today Kevin emailed me an enlarged scan of Lt McGhehey’s hands.

The attached photos tell the rest. It’s his ring. 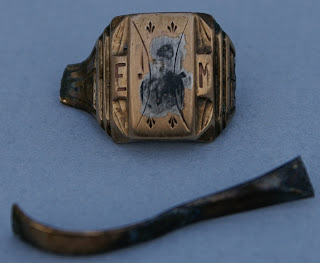 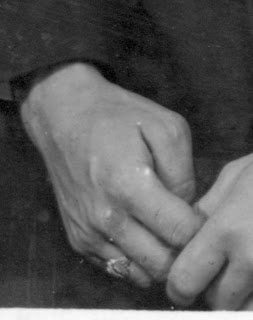