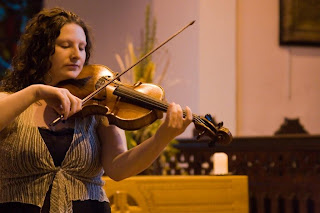 Manx fiddle player Laura Rowles will be representing the Isle of Man in Scotland next month after securing a place in the semi-final of the annual ‘Amber Fiddle Award’ created to encourage composition especially for the fiddle. Held as part of Perthshire’s international ‘Amber Festival’ Laura beat a record number of entries with her composition ‘Sheena’s Waltz’.

Laura said, “I was shocked and delighted. I wrote ‘Sheena’s Waltz’ for my dad’s wedding last year – they used it as the processional and for the first dance and everyone seemed to like it. I really enjoy writing tunes for the fiddle as it’s such an expressive instrument and I’m really excited about performing the waltz at the semi-final”.

Together with five other semi-finalists from Scotland and England Laura’s performance will be judged by three top class musicians; Shetland fiddle player Aly Bain, Swedish multi-instrumentalist Ale Möller and Bronx fiddle and banjo player Bruce Molsky. Three musicians will then be chosen to perform in the final, two days later, as part of a concert featuring international songwriter and performer Dougie MacLean and traditional Irish band Grada. With a first prize of £1,000 and a copy of the Niel Gow Trophy (the original resides permanently in Dunkeld) up for grabs the eventual winner’s tune will be featured in a future edition of specialist magazine ‘Fiddle On’, with a two year subscription as part of the winning package.

Niel Gow was a famous eighteenth century self taught Scottish fiddle player who initially was destined for the life of a plaid weaver. But his natural talent for music was expressed at an early age and he was declared a child prodigy, although he did receive lessons at a later date. At the age of eighteen Gow won a fiddle contest where he was declared to possess a highly distinctive style and caught the attention of James Murray, 2nd Duke of Atholl and former Governor of the Isle of Man. He became Gow’s patron, employing him to play at a number of events at Blair Castle and paying him a retainer of £5 per year. Gow rapidly became established as Perthshire’s best fiddle player and despite increasing fame declined to move from his family home at Inver, situated close to Dunkeld. A prolific composer almost one hundred tunes have been identified as being written by the fiddle master.

Currently studying for a PhD at the Centre for Manx Studies (University of Liverpool) on aspects of the Manx fiddle tradition, Laura is known as both a musician and teacher on the Island, performing locally with ‘Paitchyn Vannin’, ‘Shenn Scoill’ and ‘Jinnyn’. She is also currently a member of the organising committee for the Island’s inter-Celtic festival ‘Yn Chruinnaght’.

Breesha Maddrell, Manx Music Development Officer for the Manx Heritage Foundation commented, “This just goes to show how skilled Manx musicians are and what beautiful compositions they produce. Manx traditional music is certainly alive and kicking; as a movement it’s growing and becoming increasingly professional whilst not losing sight of its grassroots”.