Ancestry Centre gets go ahead 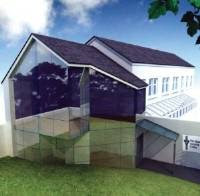 The new “roots tourism” lure, the Manx Ancestry Centre, just rode through Tynwald on a 30:2 vote. (Quentin Gill and Juan Watterson of Rushen voted against.) I received this in a letter from Stephen Harrison who is still head of Manx National Heritage, addressed to organizations that were helpful in bringing about this move:

“Many thanks for all your help and support with this project so far. A number of Members of Tynwald commented on how good our presentation and information was, as well as how important the project itself was, and this undoubtedly helped us to get it through. So this continues the MNH record of never having lost a capital project debate in Tynwald. It also means that we have another strong and important project to focus on over the next two years. The building work on the old Government Analyst’s building will start in January and take just over a year, but there is a large amount of work also involved in preparing the digitization of the various layers of the national archive for final electronic delivery. It would be much appreciated if you could continue your excellent efforts in giving the project publicity internationally. I am sure there is still much fun to be had with this project! I wish all involved great continued success, and look forward to the opening in 2010. This is a nice way to bring the year to a close.

Stephen was kind enough to send me a brochure of the Centre which was embargoed until after the Tynwald presentation. I will send it to Jim Kneale to put on our website. The news article is here.