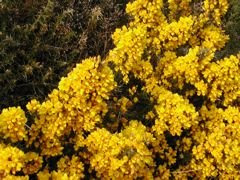 I’m going home, yes, back to the Island via Suffolk. I’ll be back at my computer sometime on the 8th. I’m not taking my laptop — this is not a working trip — but I’ll try and post from my friends’ computers. Don’t miss me too much!

The quote is from T.E. Brown’s poem “Clifton”. Although he worked there a long time he missed the Island and wrote this poem around the same time as his classic, “Betsy Lee”. Clifton is a boys’ boarding school near Bristol where Brown was a housemaster and teacher..

Clifton
I’m here at Clifton, grinding at the mill
My feet for thrice nine barren years have trod;
But there are rocks and waves at Scarlett still,
And gorse runs riot in Glen Chass—thank God!

Alert, I seek exactitude of rule,
I step, and square my shoulders with the squad;
But there are blaeberries on old Barrule,
And Langness has its heather still—thank God!

There is no silence here : the truculent quack
Insists with acrid shriek my ears to prod,
And, if I stop them, fumes ; but there’s no lack
Of silence still on Carraghyn—thank God!

Pragmatic fibs surround my soul, and bate it
With measured phrase, that asks the assenting nod;
I rise, and say the bitter thing, and hate it—
But Wordsworth’s castle’s still at Peel—thank God!

O broken life ! O wretched bits of being,
Unrhythrnic, patched, the even and the odd!
But Bradda still has lichens worth the seeing,
And thunder in her caves—thank God ! thank God!