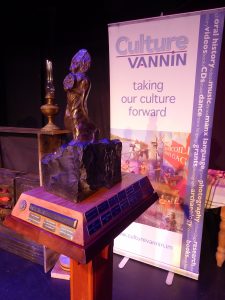 This year the annual Reih Bleeaney Vanannan (Manannan’s Choice of the Year), presented by Culture Vannin, has been awarded to the hard working Michael Players, who, during a period of more than sixty years have brought their unique presentation and promotion of Manx dialect theatre into the community.

The idea of reviving the tradition came after World War II when Miss Mary Cannell began producing plays for the Manx branch of the Celtic Congress. They were also produced by Mrs Edna Cooil and enjoyed occasional tours beyond the fringe of Kirk Michael, where they were based. However, the main focus for the Michael Players is the annual Oie’ll Verree, held at the Ebenezer Hall in the village, a traditional gathering featuring music, dance, recitation and other entertainment, before closing with the much awaited dialect play. 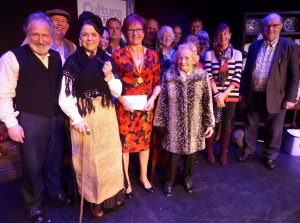 Director of Culture Vannin, Dr Breesha Maddrell, said, “The Michael Players are not just performers, though; they are sole guardians of the most important collection of Manx dialect play manuscripts anywhere in the world. With over sixty plays currently being transcribed, their collection is larger than any other archive. Key members are also involved in the recent formation of the Manks Dialect Group, which aims to celebrate and share some of our unique speech patterns, to show how language shapes who we are and how we think.”

It is particularly appropriate that the Michael Players should receive the award this year, in light of the centenary commemorations for Sophia Morrison, whose very own Peel Players brought the definitive Manx dialect plays to a wider audience; taking their inspiration from the Abbey Theatre in Dublin.

The presentation of the award at the recent Manks Concert at the Centenary Centre in Peel was made by the newly appointed Chair of Culture Vannin, the Hon Chris Thomas MHK. 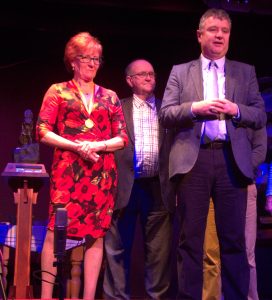 This was his first official engagement, commenting, “Recognising the Michael Players in this way is wonderful acknowledgement not only of the safeguarding of a tradition by a community through the decades, but also celebration of a sense of place through the performance of culture. We wish the Michael Players every success in inspiring future generations as the current generation seems to have been inspired.”

Manannan’s Choice of the Year, or the Reih Bleeaney Vanannan, is an annual cultural award from Culture Vannin made to an individual, or group, who has made the greatest contribution to the Island’s cultural heritage. The nominees come from a wide variety of backgrounds, working to promote and support language, literature, art, music, dance, history, education and the environment, and many more. The Mich 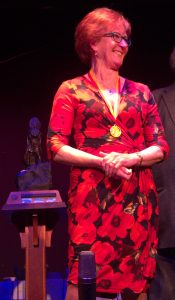 ael Players received a cheque for £500 and chose the Manks Dialect Group as the recipient of a second cheque for a further £500, which goes to a nominated cultural cause.

To find out more about the work of Culture Vannin, or to see the Michael Players in action performing The Dumb Cake in 2014 see www.culturevannin.im