When St Stephen’s Day dawned, it was with trepidation that we opened our curtains to the sight of torrential rain, but this didn’t deter many of those heading out to Hunt the Wren across the Island.

It’s a long-held tradition, not unrecognisable in other Celtic nations, although thankfully the death of a bird is no longer obligatory, and distribution of its feathers for luck has been superseded by coloured ribbons.

Some of the revellers, understandably, sheltered from the appalling weather, whilst others braved the deluge – determined to honour this local tradition. 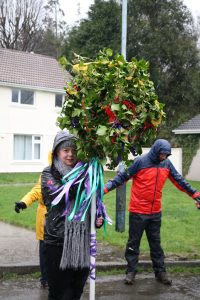 Later, a large number of players gathered on the original fair field at St John’s to play an annual game of Cammag, despite the continuation of dreadful weather. A battle between teams from the north and south (won by the latter), the game will be familiar to those who enjoy the likes of shinty, or hurling.

Although the game lost favour on the Island at the turn of the nineteenth century, with the introduction of football, there has been a resurgence of interest in recent years.

The day concluded with a rousing music session at the Tynwald Inn.