Another great reason why Alex Downie should be re-elected to the MLC. 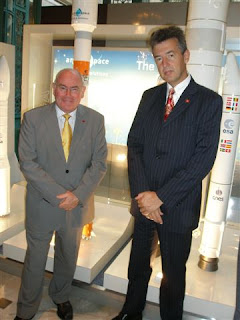 Alex Downie, MHK, and Tim Craine, the top civil servant in charge of e-business and space will be in the Washington metro area next week for the Space Expo. I have seen this team in action and they leave no stone unturned in their determination to bring home business to the Isle of Man. They are great patriots as well as superb ambassadors for the Island. I’m not sure this is realised back home but if you look at Mr Downie’s achievements: IOM Film, his work on shipping, e-business and space I think everyone will agree that he has opened up potentially huge areas of business that add balance to our finance-heavy economy.

In the survey, financial data was obtained from a sample of 14 substantial companies covering a range of activities from software development, telecommunications, data hosting and e-gaming. Data obtained in relation to 2007 was compared with data supplied by participating companies in 2008.

More recent data are not available. Results from the survey showed growth in a number of areas:

Alex Downie MLC, Treasury member with delegated responsibility for e-business, said: ‘The growth in e-business during the period clearly demonstrated the growing importance of this sector to the economy, in terms of wealth generated, jobs created and exchequer benefit.’

Tim Craine, government’s director of e-business, said: ‘These figures help to demonstrate the success of government’s policy of economic diversification. Government took the strategic decision to develop the e-business sector back in 2000 and the benefits of this policy initiative have now been clearly demonstrated.’

Philip Dearden, PKF managing director, added: ‘The research results demonstrate a high growth rate over the two year period. ‘The sector is making an increasing contribution to the Island’s economy. As well as the sector making a significant contribution to the Treasury there are a good number of high earners who benefit the economy as a result of their high disposable income. If the sector were to continue to grow at anything like these rates it would become a highly significant part of the Isle of Man economy.’

In 2004, government undertook an exercise to project how the Isle of Man economy would look, 10 years ahead in 2014. The exercise was called 2014 – The Can Do Economy.  The exercise involved looking at how the existing sectors of the Isle of Man economy would change over the next 10 years looking at worst, average and best scenarios. The exercise also attempted to identify brand new sectors that could emerge during the next 10 years. E-business was identified as one of the sectors with the most growth potential.

The 2014 report concluded that the e-business sector was likely to witness significant growth (by 2014) to become potentially the second largest sector after banking.

It also stated e-business offers the greatest potential for the future and that GDP growth within the sector was anticipated to increase five-fold.

A DTI spokesman said that sector performance data, such as the PKF research, was vitally important for economic planning purposes, so that government can assess relative sector performances and then prioritise future resource allocation to where the best returns in terms of job and wealth creation can be obtained. IOMtoday