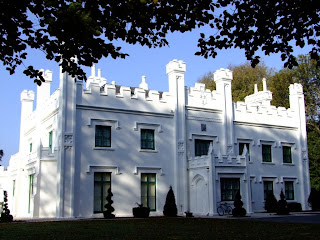 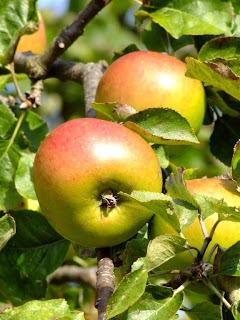 The magnificent house at Milntown (The Christian family’s house for many years) bathed in the warmth of late autumn sunshine as a steady flow of people headed towards the orchard garden for a special event in celebration of the humble apple.

Out of the extensive range of apples available there are only two known Manx varieties. The ‘Andrew Johnson’ apple is a fairly recent addition and is thought to be named after a Head Forrester on the Island, but its definition as a Manx apple is disputed by some, although it remains a popular choice for many Island gardens and orchards. However, there is no challenge to the ‘Manx Codlin’ developed by Mr. Kewley of Ballanard in the nineteenth century.

A farmers’ market supplied an extensive range of Manx produce, including a selection of organic goods, to tempt passing trade and browsers were invited to swap plants or produce, and learn more about the Woodland Trust. John ‘Dog’ Callister and Kevin Quayle were also busy creating an astonishing variety of baskets from willow and other readily available countryside materials; their fingers expertly bringing life to their creations.

In the background local music duo ‘Strengyn’ entertained visitors with their unique blend of stringed instruments, to create a fast paced and confident performance with their amazing fusion of musical genres.

Milntown itself has its own well established orchard of apple trees, but Mil Millichap from the north of the Island added to the garden’s natural display by putting on a stunning show of different varieties of apples. Visitors were encouraged to wander freely amongst the exhibits, buy young trees and test his encyclopaedic knowledge of this nutritious and versatile fruit.

This was an excellent opportunity to buy Manx produce and learn more about what local traders have to offer, and a reminder that we should perhaps seek the road of self sufficiency a little more often.