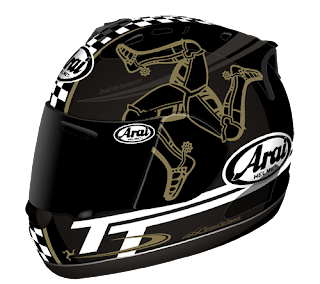 THE NEW LIMITED ARAI TT SERIES
For 2010 and the next two successive years, Arai and the Isle of Man TT organization have chosen a new sponsoring concept: Arai will introduce three limited special Isle of Man TT edition helmets in 2010, 2011 and 2012 respectively. Each run of Aldo Drudi designed TT Series will be limited to strictly 500 helmets only and the Isle of Man TT organization will receive a commission for every helmet sold.
Arai Helmet has for many years been a proud supporter and sponsor of the Isle of Man TT races. Year upon year Arai course banners and sign posts have decked the world famous track and again this year, as in previous years, Arai will be present on the Isle of Man, supporting the organisation of the Isle of Man TT races.
The first  2010 TT Series will be priced at  € 899 (including VAT – £699.99 GBP) including the free display set and will be exclusively distributed by Arai’s UK importer Phoenix Distribution through their Five Star dealer Crossan Motorcycles. The Isle of Man TT marshals will also use the 2010 TT Series Arai helmet for high visibility and to promote to the public.
History
There has always been a strong bond between Arai and the Isle of Man TT races. Many competitors and visitors prefer Arai helmets and for many years, Arai has sponsored the event. It was therefore not a big surprise when the introduction of the limited edition ‘’Isle of Man Centennial’’ model in 2007 proved to be a huge success. Over time, Arai has amassed extensive knowledge when it comes to producing limited edition helmets and models like the Joey Dunlop Replica and the Haga Monza underline that success.