Archibald Knox Exhibition Proposed for the Isle of Man

During the past three years, The Archibald Knox Forum has highlighted the unique work of the Manx born designer and teacher through the medium of talks, exhibitions and films; as well as encouraging enthusiasts to attend regular drop-in events and visit sites associated with Archibald Knox.

But now the Directors of The Archibald Knox Forum (a Manx charity) have laid out ambitious plans to mount the largest exhibition of the designer’s work in the world, on the Isle of Man.

The Archibald Knox Forum was set up with a single objective – the advancement of the education of the public, both on the Island and worldwide, in relation to the work and legacy of the Manx artist and designer Archibald Knox, who was born on the Isle of Man in 1864 and died here in 1933.

It’s envisaged that the exhibition would take place during either 2024 or 2025, with a view to attracting visitors and collectors from across the world – in the same way that Charles Rennie Mackintosh attracts a footfall to Glasgow.

Managing Director of the charity Chris Hobdell said, “We propose having the most spectacular and beautiful works ever designed 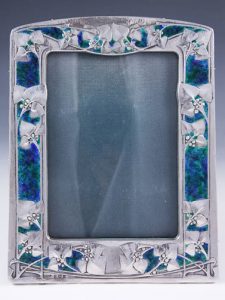 by Knox on display on the Island, which are normally kept in the world’s greatest museums and private collections.”

Archibald Knox was born on the Isle of Man at Cronkbourne village, joining the Douglas School of Art and teaching at Doug

Knox moved, briefly, to the USA before returning to settle permanently on the Isle of Man.

The proposed exhibition will require a four or five year lead in, so as to bring it together, transport the exhibits, obtain permission from various sources, insurance, train guides and speakers and raise in the region of £75,000 for this singular project.

It is envisaged that a comprehensive exhibition will establish the Isle of Man as an artistic and geographical centre for enthusiasts of the work of Archibald Knox, researchers and lovers of decorative art. The exhibition would focus not only on his world renowned metalwork and jewellery, but also his watercolours and other design work – mainly recognised on the Isle of Man. It is hoped that this project will bring a welcome boost to tourism figures and introduce new visitors to the Island’s rich history and culture, which both inspired and motivated Archibald Knox to become one of the greatest designers and artists of his generation. 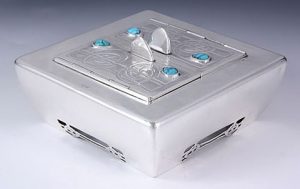 Chris Hobdell added, “Our goal is for the most effective advertising to be created in order to ensure that tens of thousands of people worldwide will be informed, as well as to assist the antiques and museums industries to spread the word so that the Isle of Man Government and the Island’s population can welcome visitors and benefit from this venture.”

This is an exciting time to become involved with the project in a variety of ways, such as becoming a member of The Archibald Knox Forum, making a donation or sponsoring the organisation’s future work, or website pages. It would also be a great opportunity for the business community to become involved in a truly Manx project about one of the Island’s most talented individuals.

The Archibald Knox Forum can be contacted at akforum@manx.net, by telephoning 01624 663762, writing to them at 6 Alexander Drive, Douglas, Isle of Man IM2 3QE, or via their Facebook page.

(Images courtesy of Titus Omega and The Pear Tree Collection)