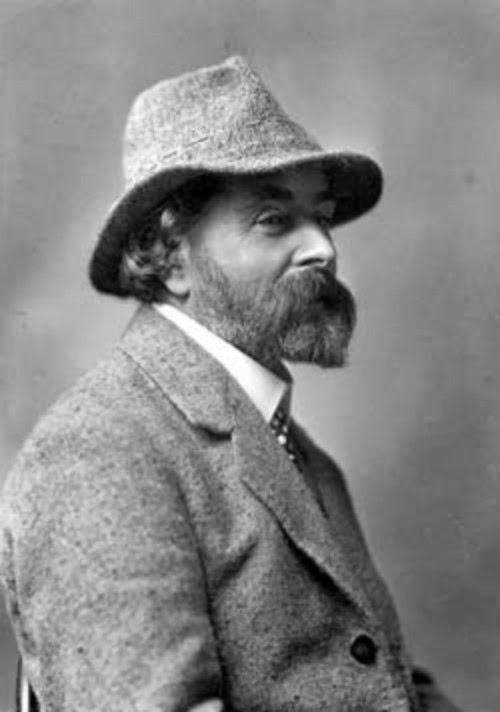 The legacy of Archibald Knox is to feature in the regeneration of the Isle of Man’s capital, developers have said.  BBC
Douglas Development Partnership said several projects were “in the pipeline” to commemorate the 150th anniversary of the Manx designer’s birthday.
Knox, one of the foremost designers in the English Art Nouveau movement, lived in Douglas for much of his life.
Spokesman Chris Pyecroft said new paving featured the artist’s work and a commemorative garden was planned.
He said: “The garden will be on the promenade, we are currently trying to pin point exactly where the original Douglas School of Art actually was. This is where Knox studied so we are planning to create the garden somewhere nearby – it would be the perfect site.
“We understand is was situated somewhere between Tower House and the Villa Marina.
“In addition, a blue plaque is to be placed at the site of Knox’s family home at the end of Athol Street.
“We are hoping this will be in place by his birthday.” Archibald Knox, the fifth child William and Anne, was born on 9 April 1864 in Cronkbourne Village, Tromode. He was educated at St Barnabas Elementary School and at Douglas Grammar School.
In 1899 he began designing for Liberty & Co and became known particularly for the new Celtic design work – much of which was inspired by ancient crosses on the Isle of Man.
“At the moment the new paving being laid in Regent Street also feature Knox’s work,” Mr Pyecroft said.
“The work being installed is an A to Y of Manx – it shows 24 letters, each focusing on something to do with the Isle of Man – obviously it’s another perfect opportunity to reflect Knox’s work.”
BBC