The Arrane son Mannin (Song for Mann) competition is an opportunity for the performance of new and original music written in Manx Gaelic, with the winner representing the Isle of Man at the annual Pan Celtic Festival in Carlow, Ireland, later this year. 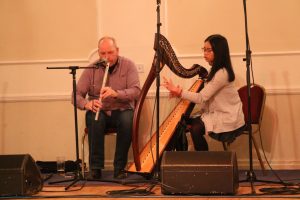 Held in the Masonic Hall in Peel, judges at the event were challenged to find the best, original song composed in the Island’s native tongue, which will go forward in competition with others from neighbouring Celtic nations, vying to clinch the top position in the festival’s International Song Contest.

Judges were drawn from a selection of the Island’s singers and musicians, who ultimately chose local trio Skeeal Elley, with their song Oie as Laa, which tells the story of a Manxman and his longing to escape a prison cell and return to his rural home in Ballaragh, on the north east coast of the Island.

The evening also included a selection of local musicians and singers, providing a range of Manx entertainment – including the former Young Singer of Mann Erin Loach, accordionist Jack McLean, musicians David Kilgallon and Malcolm Stitt and former Manx Bard Annie Kissack. Additionally there was a group from the north of the Island, comprising flautist Peddyr Cubberley, harpist Arabella Aayen solo dancer Ellie from local dance group Ny Fennee and an inspiring performance by a quartet of pupils from the Bunscoill Ghaelgagh. The evening concluded with a number of songs from the Manx Gaelic choir Cliogaree Twoaie. 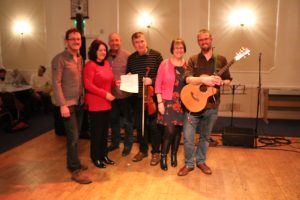