Local Gaelic choir ‘Caarjyn Cooidjagh’ has taken a little bit of Manx culture to this annual Celtic festival held in the Principality of Asturias, an autonomous community within Spain and formerly a kingdom in its own right in the Middle Ages.

A summer festival held in the shadow of the Ría de Avilés it hosts a wide range of folk music from different countries, providing a cross section of events for visitors including crafts, sports, games and exhibitions. But the main focus of the event is music which includes folk, rock and choirs which can be heard in music kiosks, parks, squares and parades all over the city. 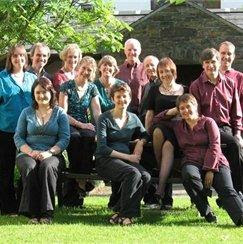 Situated on the Spanish north coast the area boasts a rugged coastline and mountainous interior where Spanish is the official language, although the Asturian language Bable is still spoken. It is hoped that eventually all place names in Asturias will be changed to reflect the Asturian language.

Often referred to as ‘the land of cheeses’ the music of Asturias varies, with the traditional Asturian bagpipe, or gaita, usually accompanied by hand drum, whistles and accordion. In recent years there has been renewed interest in traditional folk music with several ensembles gaining both regional and international recognition

Members of ‘Caarjyn Cooidjagh’ have been busy fund raising for their performances by selling copies of the choir’s CDs, but have been fortunate to receive funding from the Isle of Man Arts Council.