↓ Skip to Main Content
Home › Uncategorized › At the going down of the sun and in the morning, we shall remember them

At the going down of the sun and in the morning, we shall remember them 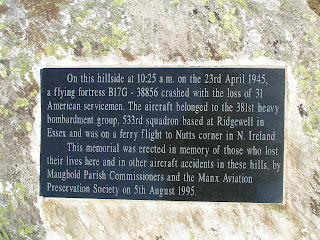 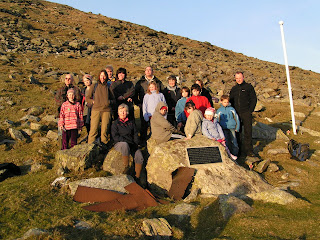 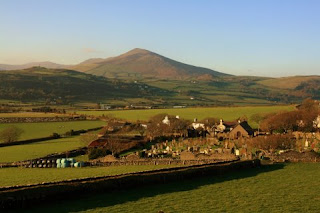 h of November 2008, a group of adults and children from the parish of Maughold made their way up to the summit of North Barrule to pay their respects at the memorial to the 31 American Airmen who had died when their B17 Flying Fortress aircraft crashed on the mountain in dense mist on the 23rd of April 1945.
The memorial is visited every year around the time of ‘Remembrance Sunday’, but this year local children were encouraged to accompany their parents on the walk to the site. It is hoped that this will encourage the young to carry on this act of Remembrance. The children were held spellbound as they were told the story of the terrible tragedy that had taken place on the mountain over 60 years before.
Those from the parish of Maughold who were on this year’s visit included Member of Tynwald, Mrs Clare Christian MLC and Mrs Marinda Fargher, the Chairman of Maughold Parish Commissioners.
The memorial is also visited around the 23rd of April each year by members of the Manx Aviation Preservation Society; on this occasion the American Flag is flown from the flagpole erected at the memorial. The aircraft was from the 381st Bombardment Group based at Ridgewell, near Cambridge, England and had been on its way to Nutts Corner in the north of Ireland where the airmen were to have enjoyed a short break from their operational duties.
Harold Ennett was working at Margher-e-Kew Farm, Hibernia, Maughold on the morning of the crash and saw the aircraft flying in from the coast at around 500ft. He saw the plane disappear in to the mists swirling around North Barrule, and moments later heard a terrific explosion.
The men were were buried on the 27th of April 1945 at the American Military Cemetery at Madingley near Cambridge.
Hat tip: Maughold Commissioners.