Aurora to Ariel – The Motorcycling Life of J. Graham Oates

Manx motorcyclist and designer Graham Oates remained in historical obscurity until local author Bill Snelling discovered his remarkable story and put it into print in 1993. The first edition sold out quickly, but the book has now been reissued with the inclusion of additional information and many photographs of his life in motorcycling. 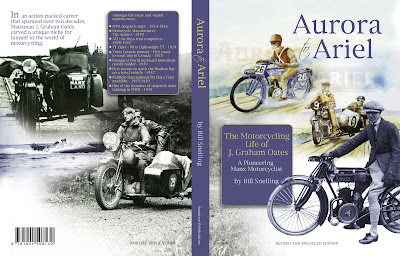 Born in 1897 in Douglas Oates was the son of a baker. Independent, resilient and a complex man he could never refuse a challenge.

‘Aurora to Ariel’ is a book about a man and his motorbikes, but also includes interesting details about his army career in both World Wars and his work rebuilding the German road transport system.

A talented engineer Oates soon began to design and build his own machines including the ‘Aurora’, two of which were entered for the 1920 TT. Despite the ‘Aurora’s’ rapid demise he had an uncanny knack of landing on his feet, and from a boozy night in Canada flowed an idea which made history.

Challenged to complete an historic journey from the East Atlantic to the West Pacific with a motorcycle and sidecar Oates rode triumphantly into the record books. ‘Aurora to Ariel’ recounts how he overcame misfortunes along the way and occasionally spent an uncomfortable night sleeping in his adapted sidecar. Back in the 1930s Canadian roads were of variable quality and sometimes Oates was forced to ride on the rail track through treacherous landscape.

He carried an insatiable hunger for new experiences, particularly during the 1930s which this book fondly recreates, including a second successful Trans Canadian journey in 1932 using a Red Hunter outfit touchingly referred to as ‘Miss Manxland’. Sending weekly reports back to the Isle of Man Weekly Times, and in contact with many Manx emigrants, his faithful companions were a rifle and his fishing gear!

Graham Oates was no ordinary man, indeed some might call him eccentric, but it would be difficult not to have some admiration for his long time girlfriend and future wife who eventually travelled out to Toronto to marry him.

‘Aurora to Ariel’ is a worthy tribute to a quiet Manxman who deserves to be remembered for his remarkable exploits.

The book is available Island wide priced at £14.99 or direct from amulree@mcb.net