Today is the 347th anniversary of the execution of William Christian, or “Illiam Dhone,” of Ronaldsway, who famously led an uprising that seized control of the island in 1651, during the English Civil War of 1641-1651 between the Royalists and Parliamentarians.

Despite its name, the English Civil War was fought in Scotland and Ireland as well as England and Wales, and Christian’s uprising prevented a Parliamentary conquest of the Isle of Man and is credited with preserving the island’s unique laws and system of government. 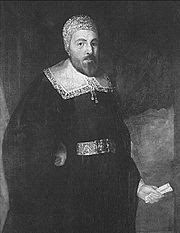 Here’s a portrait of Illiam Dhone, which means “Brown-haired William” in Manx.

In 1651, The Isle of Man was ruled by James Stanley, Lord of Mann, Baron Strange and the 7th Earl of Derby. The Manx called him “Yn Stanley Mooar,” or “the Great Stanley.” Stanley was a Royalist supporter of Charles I, and after that king’s execution in 1649, his son, Charles II. William Christian was named receiver general, or treasurer, of the island by Stanley in 1648, and commander of its militia in 1651, shortly before Stanley left to join Charles II in England.

When Stanley was captured after the Battle of Worcester, his wife, the Countess Charlotte, began negotiating with the Parliamentarians for his release. Christian and other Manx leaders, fearing she would sell the country “into the hands of Parliament,” seized most of the island’s forts. (One statement at the time claimed she proposed selling the Manx people for 2d or 3d a head).

There was more behind the uprising, however. The Manx people were incensed by changes in land-tenure introduced by Stanley, which abolished their ancient rights to their homes. They were angered by the quartering of Stanley’s English soldiers in their homes as well.

Christian negotiated with Parliamentary forces, who were allowed to enter the island unopposed in return for recognition of Manx “laws and liberties.” Countess Charlotte surrendered in November of 1651, less than a month after her husband had been executed.

And so the Isle of Man’s brief engagement in one of the bloodiest wars fought in Britain and Ireland came to an end. Manx institutions such as Tynwald were left in place, land tenure was restored and Christian remained receiver general, becoming governor in 1656.

But his luck turned in 1658 when he was accused by a new English governor of misappropriating funds related to church lands. The charges were not proved, but Christian left the island for England.

After the death of Oliver Cromwell in 1658, Charles II was invited back to England, and after he was officially crowned in 1661 an Act of General Pardon and Indemnity protected Cromwell’s supporters from prosecution. Christian returned to the Isle of Man, believing he was protected by the act, but he was arrested by Charles Stanley, the 8th Earl of Derby, and charged with treason not against the king, but against his father, the late, executed Lord of Man.

Christian refused to plead at his trial, which was clearly rigged against him, and sent a letter to the king and his council seeking protection under the Act of Indemnity. The petition did not reach Charles II until after his execution by firing squad on Jan. 2, 1663. Charles later confirmed that the Act of Indemnity — and his rule — did extend to the Isle of Man and restored confiscated property, including the estate of Ronaldsway, to the Christian family.

There is more to this story than the bare bones of it outlined above — conflict between the autocratic Stanleys and the Manx, and perhaps a struggle over land, money and authority among different landholders on the island. That’s reflected in the ballad Baase Illiam Dhone, or “Brown William’s Death,” part of which was written shortly after Christian’s execution, according to Manx scholar George Broderick. Here’s one verse:

“You were the right hand of the Earl and the right eye of the people,
That was what made your enemies rise so much against you in abhorrence.”

The song also refers to conflict between “Clein Colcad” (the Calcott “clan” or family) and the Christians or “Clein Christeen.” The Calcotts and Christians apparently quarreled and litigated disputes about land in Lezayre, and prominent Calcotts took part in Christian’s trial.

The ballad clearly reflects the great estimation in which Illiam Dhone was held by people who believed he fought for their rights to their lands and homes.

You can read more about Illiam Dhone in this article from A.W. Moore’s “Manx Worthies” (1901), and in this briefer article on Wikipedia. Records and proceedings related to his trial are available here. An article on the annual commemoration of his death organized by Mec Vannin, the Manx nationalist party, and the Manx branch of the Celtic League may be found here.