Barrule Pulls the Crowds at WOMAD 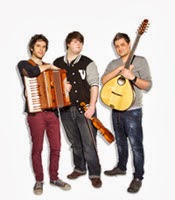 With international music pulling the crowds as never before, Manx traditional music trio Barrule was delighted to receive an invitation to perform on the BBC Radio 3 stage at the WOMAD international music festival, set in the attractive arboretum of Charlton Park in Wiltshire, where they introduced the unique music of the Isle of Man to large audiences and fellow musicians, several of whom declared Barrule’s gig to be the favourite of the festival.
WOMAD (World of Music and Dance) was founded by Peter Gabriel, Thomas Brooman and Bob Hooton, with their first festival in 1982, but now established as a truly international festival bringing together artists from all over the world to present music of passion, individuality and excellence.
With a reputation for introducing unknown artists to a wider audience, WOMAD has presented more than one thousand musicians from over 100 countries to live audiences of in excess of one million people in its lifetime.
After weeks of glorious weather, a forecast of rain did little to dampen the enthusiasm of the all-male line-up of Adam Rhodes, Jamie Smith and Tom Callister, who were overwhelmed by the fantastic response of music lovers determined to have a good time come rain or shine (although Barrule’s gig was bathed in sunshine) at the 31st WOMAD festival; with the additional delights of workshops, food tastings and a global trade market.
Their inspirational arrangements bring renewed vigour to some of the older songs and tunes, with an evolutionary approach that has already captured the imagination of a Manx audience and the hearts and souls of many new fans. Hosting a mix of traditional and newly composed songs and tunes, their performances reveal a youthful exuberance and a refreshing sensitivity with links to the contemporary music scene and a style undoubtedly their own.

Spokesperson for the group Adam Rhodes revealed, “We were very lucky to have been asked to perform on the BBC Radio 3 stage, set in the beautiful arboretum of Charlton Park. It’s a venue that myself and Jamie are quite familiar with, having played there two years ago with Mabon, so we were very much looking forward to it! Wanting to put on a good show, we asked Greg Joughin to join us on vocals and also had the pleasure of being joined by Manx dancers Gráinne Joughin and Alison Carroon for a few sets, much to the audience’s delight.”

The crowd gave Barrule a warm welcome, bought most of their CDs and veritably lapped up their performance of music and dance, which was recorded by BBC Radio 3 as part of a broadcast later that evening.

Dr Breesha Maddrell of the Manx Heritage Foundation commented, “WOMAD is one of the greatest world music festivals. For Barrule to have secured a spot on the BBC Radio 3 stage is fantastic news for them as talented musicians and for the whole of the Island; and the Manx music scene in particular. Tom, Jamie and Adam are a huge inspiration to young musicians in particular – they show that Manx music can take its place on the international stage.”