Kelly McCarthy Posted on May 13, 2013 Posted in Uncategorized
The UK’s Chief Scout Bear Grylls has visited the Isle of Man as part of a flying tour of the North West Scouting Region. 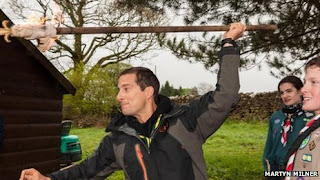 The survival expert arrived in Peel by helicopter to take part in a range of activities including kayaking and raft building.
The 38-year-old adventurer said he was “super excited” to visit Scouts in the Isle of Man.
Mr Grylls became the UK’s youngest chief scout in 2009, aged 34.
Assistant director of the Scouts, Simon Carter, said Mr Grylls was full of energy and enthusiasm over the event and “absolutely blown away” by the young Scouts in the Isle of Man.
Mr Carter said 4000 people turned up to the event including the island’s 130 Scouts.
“It’s been brilliant. You can taste the atmosphere in the air.” The trip was part of a whistle-stop tour of 12 Scouting events by Mr Grylls across the North West over the weekend. Mr Grylls has featured in a number of TV programmes using extreme survival techniques which include killing alligators and sleeping in a camel.
http://www.bbc.co.uk/news/world-europe-isle-of-man-22480427