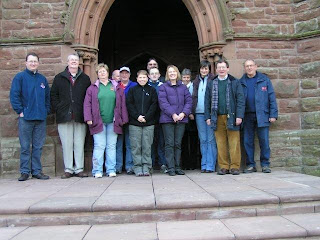 Annette Thackray and Marion Lawrence are both part of a small community of bell ringers on the Isle of Man continuing the tradition of campanology. Based at St. German’s Cathedral in Peel they meet weekly to practise in one of only two towers on the Island. Annette began her love affair with bell ringing in her early teens in Eastham on the Wirral. Her father was curate of the local church and she was taught by her sister who already had a number of years of bell ringing experience under her belt, eventually becoming Tower Captain before the family moved to another parish. Relocating to the Island when her father was made Vicar of Jurby and St. Judes Annette took a sabbatical from bell ringing for over twenty years, before learning that the bells of St. German’s Cathedral were being recast and restored. Jumping at the chance to get involved, Annette took the ropes on the first night the bells were rung in 1998 and has never looked back.
You’re never too old to learn, as Marion found out after meeting Annette socially in 2001 and revealing that she harboured a long held desire to learn bell ringing. Marion proved to be a fast learner mastering the bells in a few extended sessions before attending courses in England to fast track her experience. There is an enviable choice of bell towers in most towns and villages in England and Wales, where it’s possible for an experienced bell ringer to be welcomed at either a practise or a service.
Both Annette and Marion take every opportunity available to scale the dizzy heights of a bell tower to pursue their hobby, but have now decided to travel further afield on a whistle stop tour of part of the USA. Choosing from an enormous network of bell towers was no easy task, although distance, time and weather conditions helped narrow down the possibilities. They considered joining the ringers of Kalamazoo in Michigan for one of their many special weekends of bell ringing, but for now have decided to put this destination on the back burner.
Georgia
Annette and Marion’s first stop will be Georgia where they hope to ring for Sunday service at St. Luke’s Episcopal Church in Atlanta before moving northwest to Marietta. Their next destination will be The Church of the Good Shepherd in Augusta before heading at a more leisurely pace towards historic Charleston in South Carolina for an extended organised bell ringing weekend. Complete with workshops for conductors and the chance to try a Quarter Peal (45 minutes non stop ringing), there’s also an opportunity to view and hear four bells in a local Russian Orthodox Church and the chance to sample four different bell towers.
There is a strong core of about 30 enthusiastic regular ringers of all ages on the Island using the towers of both the Cathedral and St. George’s Church in Douglas. Annette now also teaches anyone who fancies having a go at bell ringing.
Valerie Caine © February 2010 Courtesy of Manx Tails