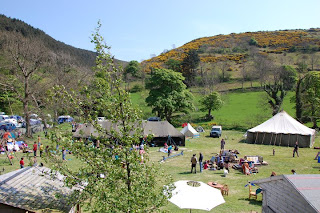 There’s a new look to Beltane and Laa Boaldyn these days. A bit more Glastonberry than Glashen but it looks great fun. Visit the Facebook link at the top of the page to see more photos.

The arrival of the merry month of May has special significance in the Isle of Man and was celebrated in the past with a Druidical festival called Beltane when bonfires were lit on hilltops and various ceremonies were enacted.

One custom was to gather a small bunch of primroses and leave it on the doorstep on May Eve to keep the witches away.
Another, still observed, is to make a crosh cuirn by binding together two rowan twigs with lambswool (you must not use a knife).
This is placed above the door inside the home and left there all year, for the same purpose.
One custom that has fallen by the wayside concerned the choosing of a Queen of the May.
The following account is from Waldron’s Description of the Isle of Man, 1726:
‘In almost all the great parishes they chuse from among the daughters of the most wealthy farmers a young maid, for the Queen of May.
‘She is drest in the gayest and best manner they can, and is attended by about twenty others who are called maids of honour; she has also a young man, who is her captain, and has under his command a great number of inferior officers.
‘In opposition to her is the Queen of Winter, who is a man dressed in women’s clothes, with woollen hoods, fur tippits and loaded with the heaviest and warmest habits one upon another: in the same manner are those who represent her attendants dressed, nor is she without a captain and troops for her defence.
‘Both being equipped as proper emblems of the beauty of Spring and the deformity of the Winter, they set forth from their respective quarters; the one preceded by violins and flutes, the other with the rough musick of the tongs and cleavers.
‘Both companies march till they meet on a common, and then their trains engage in a mock-battle.
‘If the Queen of Winter’s forces get the better so far as to take the Queen of May prisoner, she is ransomed for as much as pays the expenses of the day.
‘After this ceremony, Winter and her company retire and divert themselves in a barn, and the others remain on the green, where, having danced a considerable time, they conclude the evening with a feast: the queen at one table with her maids, the captain with his troop at another. There are seldom less than fifty or sixty persons at each board . . . ‘
The mock battle referred to has been successfully revived in recent years at Manx National Heritage May Day events at Cregneash.
E. Kermode, whose writings dated 1885 were published 100 years later as Celtic Customs, said Waldron was the only writer who mentions the custom as having existed in the Island, and but for him the memory of it would have passed away into entire oblivion, so completely had the practice itself died out, although there was no doubt the custom was a very ancient one in the Isle of Man (probably of Norse origin).
He added: ‘We have no evidence that the Maypole or Morris Dancing ever obtained a footing in the Isle of Man.
If they were ever introduced it would probably be by English residents.
The customs and amusements most in use in the Island seem to have had greater resemblance to those of Ireland and Scotland than with those of England.
Kermode noted that in later years, instead of the seizing the Queen herself during the mock battle, one of her slippers was substituted and this was ransomed in a similar manner to pay the expenses of the pageant.
The procession of Spring was called the Maceboard (being probably a corruption of May-sports), and went about from door to door inquiring if the inmates would buy the Queen’s favour, which was composed of small pieces of ribbon.
The traditional song Tappagyn Jiargey (Red Top-Knots), which appears in A. W. Moore’s Manx Ballads, is connected with May Day customs.
It was one of Twelve Manx Folk Songs, arranged with piano accompanist by Arnold Foster, with translations by Mona Douglas and published in 1928.
In her introduction to it, Miss Douglas says: ‘This song is connected with the old Manx May-Day custom of a mock battle between Summer and Winter, in which the Queen of Summer and her followers drive off the Queen of Winter and her forces and are hailed as victors.
‘The Summer Queen’s head-dress was decked with coloured ribbons, to which the title refers.
‘This custom is no longer celebrated traditionally in the island, but the song is still fairly well known.
‘The refrain has a peculiar and characteristic rhythm, and early collectors seem to have found difficulty in getting the exact note-value down on paper.
‘In the version used here the actual notes are identical with Moore’s version in ‘Manx Ballads’ , but the time has been noted direct from folk singers (children at Ballaglass), and varies a little from Moore’s notation.’