Betjemanx – John Betjeman and his Links with the Isle of Man

Kelly McCarthy Posted on June 8, 2012 Posted in Uncategorized
Written by former Douglas Borough Librarian, John Bowring, and published by the Isle of Man branch of The Betjeman Society, this revealing and informative little volume is an important addition to both the burgeoning Manx bookshelf and the extensive collection of books detailing the life and works of the former Poet Laureate. 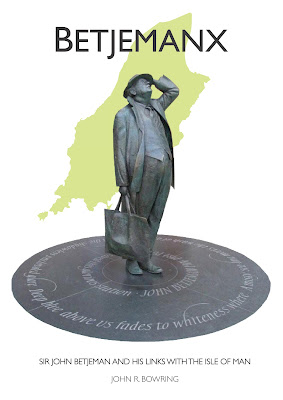 Introduced to the Island by fellow poet W. H. Auden, Betjeman’s affection for the Isle of Man lasted a lifetime and he wasted no opportunity in extolling its virtues to his many fans and readers.
His views of Island life, brought together from different sources, make absorbing reading as Betjeman describes his varied experiences with candour and honesty, albeit occasionally tinged with a little romanticism. Betjeman’s interest and curiosity in people, architecture and landscape ensured that there was much to entertain him during his numerous visits to the Island, with a selection of photographs reproduced in the book.
Known for his eccentricities and idiosyncratic nature, the name Betjemanx reflects the poet’s enjoyment of reconstructing his surname to suit the context; occasionally signing himself as the Manx sounding Ewan Quetjeman.
Betjeman became both President of the Erin Arts Centre and Patron of the Mananan Festival and news of his death came as a huge blow to his many friends on the Isle of Man.
Copies of the book, priced at £6 including post and packing, are available from the Isle of Man branch of The Betjeman Society based at the Erin Arts Centre.
www.erinartscentre.com
www.betjemansociety.com
Valerie Caine
© June 2012 (Courtesy of Manx Tails)